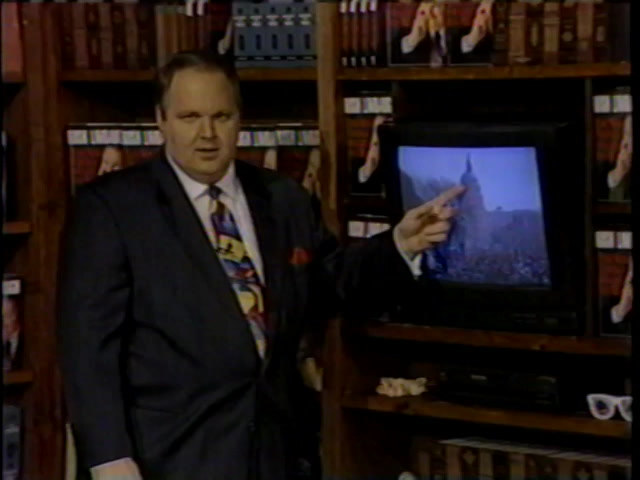 The list of the Republican National Committee’s resolutions and the bullet-point list of goals the Trump Administration has set for its second term show that the Republican Party is as obsessed with the teaching of American history as at any time since Rush Limbaugh began decrying the National History Standards back during Clinton’s first term. It is more racist now than it was then.

Limbaugh had read Lynne Cheney’s infamous piece in the Wall Street Journal criticizing the Standards, in which she had argued that the National Center for History in the Schools’ effort to create a guidebook for teaching American history was “politically correct.” It left out the Founding Fathers, she claimed falsely, and it celebrated the stories of minorities and women and would leave students with a cynical and pessimistic view of their Nation’s history.

Acting on this cue, Limbaugh took an American history textbook on his show (Yes! He had a television show!) and proceeded to tear the pages out of the book to demonstrate the sort of censorship “liberals” were imposing on American children. It was brainwashing, he charged, and it was dangerous.

These sorts of reactions to the teaching of history are commonplace. Teaching history is always political. There has always existed a tension between history as civic education (the production of patriotic and law-abiding citizens) and history as academic discipline (the critical study of continuity and change, measured across time and space, in peoples, institutions, and cultures).

Now the target is not the National History Standards but the 1619 Project, and all it represents to the fever-dream imagination of the Republican Right. You can see this reaction in the efforts of Republican Senator (and 2024 GOP Presidential candidate) Tom Cotton, who late in July introduced his “Saving American History Act of 2020.”  In it, he proposed “that the true date of America’s founding is July 4, 1776, the day the Declaration of Independence was adopted by the Second Continental Congress,” and that “the self-evident truths set forth by that Declaration are the fundamental principles upon which America was founded.”

Many Americans who know little of their nation’s history would have agreed with Cotton. But Cotton was worried nonetheless.  He warned that “an activist movement is now gaining momentum to deny or obfuscate this history by claiming that America was not founded on the ideals of the Declaration but rather on slavery and oppression.” In the aftermath of the murder of an African-American man by four Minneapolis police officers, protesters affiliated with the Black Lives Matter movement had agitated successfully for the removal of monuments to Confederate “heroes” and other racists, slaveowners, and secessionists. Earlier Cotton had called for the use of American military forces to violently remove these almost entirely non-violent protesters, a suggestion the President evidently liked.

But now Cotton was taking aim at the 1619 Project. It had appeared in the New York Times a year before he introduced his legislation. Cotton’s resolution required that no federal funding be provided to public schools that used or taught any of the 1619 Project materials.  Cotton asserted that the 1619 Project was a “racially divisive and revisionist account of history that threatens the integrity of the Union by denying the principles upon which it was founded.” It must be suppressed. It must never be taught to children.

So we should not be surprised that the Republican National Committee last month waded into the controversy by passing a resolution “to conserve history and combat prejudice—Christopher Columbus.”  The Genoese explorer was, the resolution read, “a courageous, determined, faithful man of vision, whose voyages to the Americas linked two continents…and ultimately laid the foundations for the birth of the United States of America.”  Columbus’s voyage, part of “the expansion of Western Civilization, and the establishment of the United States, has led to an ever-improving free and equal society benefitting all Americans.” Therefore, the RNC resolved to encourage “public educational institutions to celebrate Columbus’s unparalleled contributions to human connectedness; his role in the creation of America, and his importance as a figurehead for Americans facing anti-Italian and anti-Catholic prejudice.”

The Republican National Committee also approved a resolution denouncing the “threats to the First Amendment,” which it believed had escalated “in the wake of the Chinese Coronavirus outbreak.”  Among these threats was that “Freedom of Speech” was “trampled on daily with the notion of political correctness; the plan to eliminate ‘hate speech’; and the promotion of a ‘cancel culture,’ which has grown into an erasing of history, encouraging lawlessness, and violating the free exchange of ideas, thoughts, and speech.”

That probably sounds a bit over the top in comparison with the relatively sparse language of President Trump’s fifty-point list of goals for his second term.  One of these is to “teach American Exceptionalism.”

But what that means is quite simple.  The President may be a clown, but he is still dangerous.

If you argue, as nearly every historian does, that enslavement was central to the growth and development of the United States, that the Constitution as an instrument of governance protected the institution of slavery and hard-wired it for control by slavers, you are anathema to today’s Republican Party. If you assert that this country could not have developed in the way that it did without a systematic program of Native American dispossession, your loyalty is suspect.  If anyone has ever told you that what you have written or said is “politically correct,” what they are really trying to do is dismiss your hard work without doing the heavy lifting required to counter the evidence upon which you built it.

Republicans have committed themselves in 2020 to writing into textbooks and curricula the biggest lie in American history, a self-serving and propagandistic depiction of the nation’s history that either out of ignorance or ideology denies the role of slavery and dispossession of Indigenous peoples in its founding.

This entire administration, for the past four years, has shown its incapacity for telling the truth.  Lie after lie, it is exhausting.  Its brazen corruption, its monumental incompetence—I feel like it grinds me down at times.  And now, they want to teach and preach that Columbus was brave and pure, that slavery was an aberrant flaw rather than the absolute foundation, and that this country was founded on principles of liberty and equality it has never managed to live up to.  I write these words in the aftermath of yet another police shooting, this time in Kenosha, where a white officer fired seven shots at point-blank range into the back of a young African-American man in front of his three children. Racism lies at the heart of this republic’s story.  You cannot deny that.  It lies at the core of the reasons why Donald Trump became president in the first place.  And in its diseased interpretations of the American past, it lies so very close to the heart of today’s Republican Party.