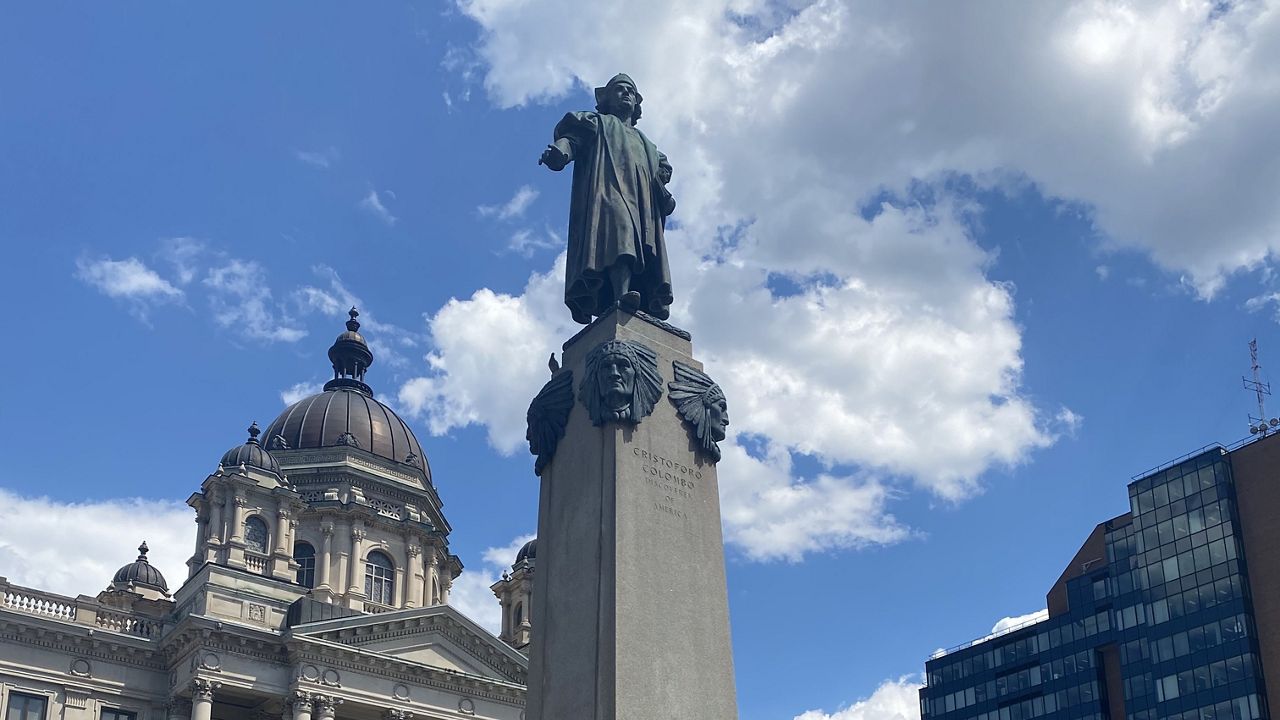 This past Thursday, the Onondaga Nation issued a statement on the notorious statue of Christopher Columbus located in Columbus Circle in downtown Syracuse. They did so at the invitation of a Syracuse Inter-Faith Commission, and as a contribution to the 23-member panel that will issue recommendations to the mayor about what to do by the end of the summer. The Onondaga Nation’s statement is worth your time and attention.

The Nation expressed their hope that “through diplomacy, discussion, and open minds, these discussions will lead to a positive solution for the future of Syracuse with inclusion for all people to live in peace as neighbors and brothers.” They looked forward to “an outcome that will encourage peace, understanding, and the united brotherhood exemplifying the foundation of cooperation, peace, and equality for the generations yet to come.” They reminded Syracusans that the city stood in the heart of what was once their homeland, the site of the central council fire of the Haudenosaunee, and that the Onondaga Nation “carries a great responsibility in the continued existence of our sovereign government.” The Nation’s “traditional teachings are morally dignified and highly principled in peace and democracy and our way of life means being ever thankful for the many gifts of our mother earth. We are,” the statement reads, “people culturally mandated to respectfully live as caretakers of Mother Earth and as equals to all beings within the natural realm.” Anyone who knows anything about the history of Syracuse knows that the City and its people have seldom lived up to these ideals.

The statement struck a conciliatory and diplomatic tone in addressing the City’s Italian-American community, which has raised money to keep the Columbus statue right where it is.

We fully understand the wishes of the Italian American community to honor their heritage, but it is burdensome for the people of Onondaga to see Christopher Columbus memorialized with a statue.   Within our lands and hearts, finding equality and peace is difficult knowing the hardships our ancestors endured as a consequence of his campaign. Our own monuments, beautiful lakes, streams, rivers, and the earth itself, has suffered greatly as a direct result principle of the Doctrine of Discovery to which Columbus used to claim the lands in the name of the Spanish crown.

The power of the pen favors the writers of history. In truth, what was “discovered” on this continent we know as Turtle Island were well established independent nations of indigenous peoples.  People living within their respected ways of life in accordance with their individual cultures. As indigenous people, we are taught of the exploits of Columbus while our own history was being unheard, misunderstood, and often erased.

The Onondagas thought it best that the statue be removed. The space it occupies might be repurposed to better ends.

At this crucial time in our joint history with the need for unity and compassion at hand, we ask ourselves is honoring the heritage of the Columbus righteous and just? Should we continue to ignore all the different peoples who suffered enumerable atrocities? We think not. We know we are not responsible for the transgressions of our ancestors, but it is never the wrong time to do the right thing. The Onondaga Nation does not wish anyone’s culture or heritage to be affronted in the manner ours have suffered; but to find a way to allow the space currently occupied by the Columbus statue to be reinvented and reenergized into a symbol of unity for all.

The statement concludes with a call to find a good mind, to come together and find a consensus and a solution “in which all the peoples who call Syracuse home may find a way to continue to honor each other’s heritage and cultures.”

There is a lot going on in this document. Columbus appears in it as both myth and symbol, as something more than a historical figure. I have written about this “mythical Columbus,” and the functions these myths serve, on this blog in the past. For Italian-Americans Columbus serves as a symbol of freedom and a hero whose experience shows that Italians are important in American history, and that Italians were present at the very creation of the American Nation. In reality, we know that Columbus was an aggressive slaver who never set foot in North America. For Native peoples, Columbus is made to stand in for all the burdens suffered by Indigenous peoples. To the Onondagas’ charge that Columbus was responsible for “the hardships our ancestors endured as a consequence of his campaign,” a historian might argue that Columbus never came close to the Longhouse. He did nothing to you, and neither to “the lakes, streams, rivers, and to the earth himself.” Those who followed him did loads of damage, but that is a longer and more complicated story. “The Doctrine of Discovery,” which according to the Onondaga Nation Statement “Columbus used to claim the lands in the name of the Spanish Crown,” was as much a justification for colonization drawn up centuries later than it was license for empire: Indigenous peoples paid no attention to papal bulls and colonial charters, and the European “Ceremonies of Possession,” as historian Patrica Seed called them, were performed for other Europeans, not native peoples. The work of colonization was brutal and violent, but the process in North America especially was a remarkably unintellectual process. The Doctrine of Discovery mattered little on the ground in the Americas, where Native peoples retained the power to ignore it. Indeed one can find many instances of Haudenosaunee orators dressing down Europeans and their pretentious claims to discovery and conquest.

But there is a problem with these arguments. One of the things that has struck me as I have worked on a history of the Onondaga Nation is the Nation’s willingness and ability to speak for Indigenous America writ large, and to have Native North America listen. The Onondagas always have carried more influence than their relatively small numbers would lead one to believe. And for the Onondagas and their allies, the problem with the Columbus statue in Syracuse is precisely the things he has come to symbolize for all Indigenous peoples: the well-documented and undeniable brutality of European colonization, and a campaign erasure, violence, and exploitation that has lasted centuries, from 1492 to the present. With its feet on the heads of Indigenous peoples with Plains Indian Headdresses, and with its friezes depicting Columbus as both hero and conqueror, the statue is a grotesque and graphic celebration of five hundred years’ of genocide, and an white-washing of the viciousness of the Columbian Encounter in the Caribbean.

The Onondagas would like to see the statue removed. They are not alone in this. But they spoke to the people of Syracuse as neighbors. They acknowledged the position of the city’s Italian-American community. But in terms similar to what has been done with the Skä۰noñh Great Law of Peace Center, which repurposed an old living-history museum representing the Jesuits called Ste. Marie Among the Iroquois, the Onondagas spoke of working together in a unified manner to give new meaning to the space occupied by the Columbus statue, to allow it to “be reinvented and reenergized into a symbol of unity for all.”

When the Onondagas filed their “land rights action” more than fifteen years ago, they stated their wish to “bring about a healing between themselves and all others who live in this region that has been the homeland of the Onondaga Nation since the dawn of time.” At a time when groups like Upstate Citizens for Equality were ginning up white peoples’ fears of being dispossessed by Native Americans in Cayuga and Oneida territory, the Nation made clear that it wanted justice and an acknowledgment of their rights to the lands taken in violation of United States law, but that “we will not displace any of our neighbors—the Onondaga know all too well the pain of being forced to leave our homes and do not wish that on anyone.”

There is a long history informing the Onondaga Nation statement. In its demonstration of the Nation’s leaders’ diplomatic skill, and the tactfulness with which the Nation’s leaders assert their will, and in its call for cooperatively defining and sharing space, it echoes themes that run throughout the long history of the Onondaga Nation, and especially in its relations to the non-Indigenous community of what has become over time Central New York. In the relationship between Syracuse and the Onondagas over many, many years, the Onondagas have often been been better neighbors to the City than the City has been to them. The City has expressed a willingness to listen, but acting on what it hears might be difficult. There are many who want the statue preserved. Let’s hope that the Mayor’s commission approaches its work with a good mind, and a desire to be good neighbors to the Onondaga Nation.