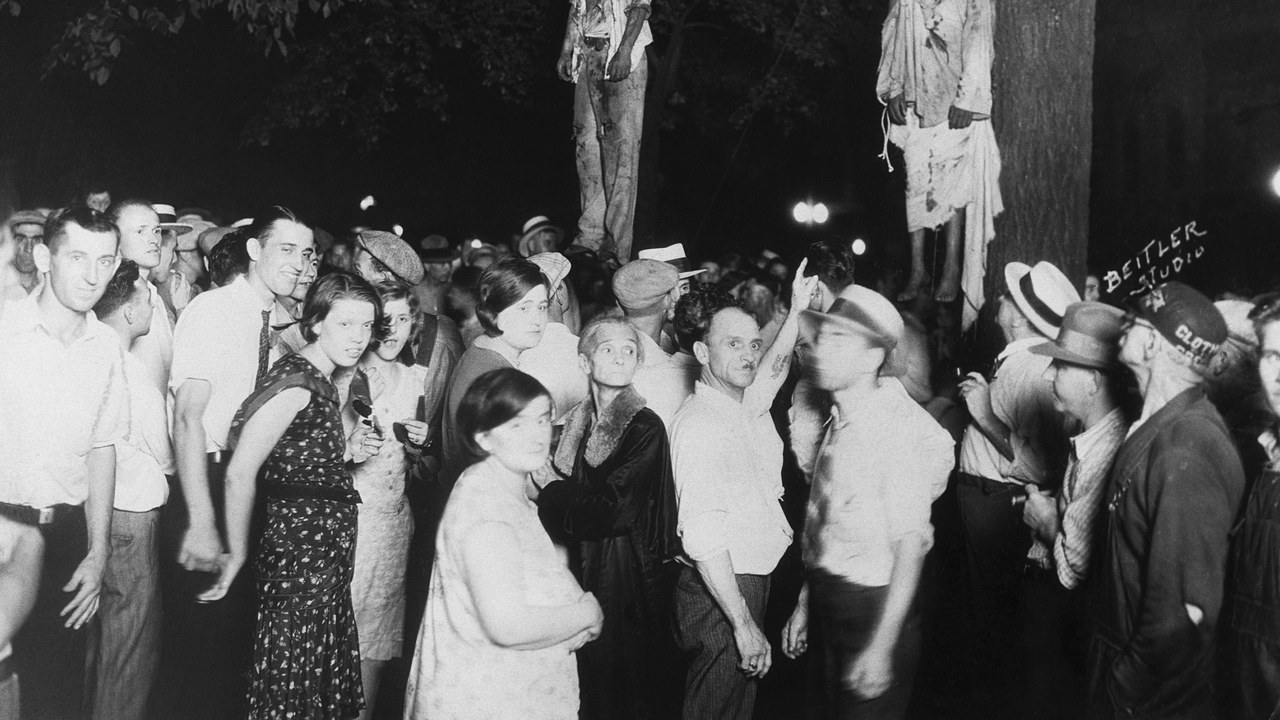 It was all a joke, they said. You saw the video. The people were laughing. They thought it was funny. Geez. Where’s your sense of humor? Nothing was meant by it.

The “it,” of course, was the scene from the President’s latest “rally” in Florida. While riffing on the refugee crisis, the President wondered aloud what might be done about the problem of refugees crossing the border. One Florida Man audience member shouted, “Shoot them!”

The white people standing behind the President laughed out loud, shouted their approval, applauded, and hooted and hollered. The President, who has demonstrated his racism repeatedly, did not discourage this. No. He joined in. It’s genocide humor, and it has a long history. Students of Native American history ought to recognize that immediately.

Sometimes it is useful for historians to consider who is laughing at whom. Whose cultural values can be mocked, scorned, and caricatured?

At the outset of the encounter between natives and newcomers, Indians sometimes laughed at the Europeans they were coming to know. Their appearance, their customs, their cluelessness about survival in a new land: all caused Indians, on occasion, to laugh at them. But that soon changed. A Powhatan priest, for instance, late in the seventeenth century approached the overseer on William Byrd’s Virginia plantation. The priest offered to make rain in exchange for two bottles of rum. The priest began to work, and soon the rain fell. Byrd refused to pay the priest. Byrd, who was only joking, told the priest that “hew as a Cheat, and had seen the cloud a coming.” Only after teasing the priest some more did Byrd provide him with the rum. When another Powhatan healer worked to charm a rattlesnake that the planter William Claiborne had captured, Claiborne hit the snake with his cane, causing it to bite the healer. He recovered from the venomous bite, but to Claiborne it was all a joke. He and his associates got a good laugh out of it. Only joking.

Who is laughing at whom? The process continued. Americans in the 1830s described the Mexicans and Pueblos who inhabited New Mexico as backwards and barbaric, as people “peculiarly blessed with ugliness,” and a “lazy and gossiping people” who lived “in darkness and ignorance.” This racist rhetoric provided, of course, a justification for empire, as American imperialists occupied their land. They would uplift the savages as they took their land. John Watts, a delegate from New Mexico in the 1860s told Congress that it should ban the liquor trade in the territory. If alcohol poisoning, however, was an “easy and a pleasant way to die,” he suggested that Congress might permit “the poor Indian, for whom our sympathies run out in uninterrupted stream, to enjoy the privilege of dying in that glorious manner?” According to the record, laughter followed Watts’ joke, genocide humor on Capitol Hill.

When the suffering of a particular group, today as in history, becomes the subject of a dominant group’s humor, that says much about the morality, compassion, and wisdom of that dominant group. Talk of shooting immigrants will accompany the actual shooting of immigrants. Indeed, less than a month ago federal authorities arrested a self-constituted militia leader who held refugees at gunpoint on the southern border. Talk of native peoples’ inhumanity always preceded violent acts of inhumanity by the dominant group. It preceded George Percy’s expedition against the Paspaheghs early in the seventeenth century when the English soldiers amused themselves by “shooting out the brains” of the Native American children they had taken captive. It preceded the “trophy taking” that took place after the Sand Creek Massacre, when Colorado militia forces castrated the bodies of the men they gunned down, and it preceded the standing ovation opera-goers gave in Denver when scalps taken by these cavalrymen were displayed at intermission. It preceded the “many bad deeds” white people did to the Crows after they settled on their Montana Reservation. White Ranchers, the Crow woman Pretty Shield said, “gunned down Crow horse, she recalled bitterly, as though they “were wolves that killed the white man’s sheep.” She recalled the time when “white cowboys mead a deaf and dumb Crow boy on the plains, and because he could not answer their questions, could not even hear what they said, they roped him and dragged him to his death.” James Byrd, the African-American man dragged to his death in 1998 in Jasper Texas: his death, too, took place at the hands of men deeply committed to their racist values, including their racist jokes.

The President is stirring up a noxious brew of lethal ingredients. The dangerous humors unleashed are toxic, and will have horrible consequences. He was only joking, you might say. Loosen up. It was meant to be funny. But we all know that racist activity is on the increase, that those who hold these views have been emboldened. The white people in the photograph at the top of this post–they are smiling, too, at a lynching. The brutal rhetoric that preceded this sort of violence is becoming more common. It is encoded, but it is there. And it is happening more openly and more often. Those who laugh at the notion of racist violence, at genocide humor, will be judged harshly by historians. They might be “very fine people” individually, but theirs is a moral failing, and it is racist. We who study the past have seen this before. Too often, dehumanization leads to violence. Dehumanization is the precondition to violence.