After class a couple of weeks ago, one of my students asked me why the Winters decision had not played a larger role in the Water Protectors’ efforts to defeat the Dakota Access Pipeline. The students had read Winters v. US (1908) and they had been following closely developments at Standing Rock in their current events reading.

I have been teaching college history for a long time, but I am still reminded quite often how much there is that I do not know. My very best students frequently drive me back to the piles of books in my office, or to the library, or to the wonderful world of resources available online. 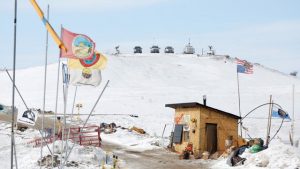 Sometimes their questions force me to ask my friends—historians, anthropologists, and, in this instance, lawyers—for guidance.  I learn a lot through teaching.  It is why I am so happy and feel myself so fortunate to be at Geneseo.

Winters, as Charles Carvell noted in an extremely useful article that appeared in the North Dakota Law Review, is quite simply a phenomenal ruling. “It occurred at a time,” Carvell writes, “when Indians wars were not distant memories and when federal Indian policy was      not to promote or even protect Indian interests but to break apart tribal communities and assimilate Indians into white society.” This was, Carvell continues, the era of Allotment, and of boarding schools—a full court press against native peoples and their cultures.   “The decision occurred at a time when the disappearance of ‘the Indian’ and Indian tribes was thought to be at hand.  It was issued a few years after Lone Wolf v. Hitchcock,” the 1903 decision that recognized the plenary power of Congress over Indian affairs and the ability of Congress, unilaterally and regardless of context, to abrogate an Indian treaty.  Winters was litigated as settlers crossed the Plains in droves. Still, “despite the milieu in which it was litigated, the Winters decision protected tribal interests.”

How did it do that? The Court held that when Congress established an Indian reservation, it established as well a right to the water necessary for that reservation to achieve its purposes.  Since one of the stated goals of the reservation policy involved leading native peoples towards what the federal government and many reformers considered a civilized way of life—and

in this instance the native peoples in question were the Gros Ventre and Assiniboine communities residing near the Milk River on the Fort Belknap Reservation—that meant guaranteeing them the water they needed to undertake stock-raising and agriculture.  Thus the Winters Doctrine. Settlers upriver had diverted waters from the Milk River and this, the Court held, was unlawful.

So at the very time that Congress was seeking to dispossess native peoples and eradicate their culture, the Court, in this quirky case, recognized that these reservations had a claim to water superior to that of the settlers who coveted this vital resource.

Water is essential on the plains.  As the Water Protectors have asserted, “water is life,” and in their view, the Dakota Access Pipeline jeopardized waters flowing through the reservation.  As early as 1976, according to Carvell, the Standing Rock Sioux Tribe asserted that it controlled water and other natural resources on its reservation. The Standing Rock Sioux that year began demanding that all users of water obtain the approval of the tribal government.

And the Standing Rock Sioux have not only stated that they have control over their waters, but they have acted on their words. “They have developed on-reservation water resources, and reject any notion that in doing so they are subject to state regulatory authority. They have developed,” Carvell continues, “irrigation projects and water for domestic, municipal, and government purposes.”

Standing Rock, in other words, has asserted that its reservation was established as a permanent homeland and, as a result, that it “is entitled to use all water necessary to make itself economically self-sufficient, and because what is necessary to ensure self-sufficiency is never stated the tribe’s water right is ‘inherently unquantifiable.’” The scope of their claim is immense, extending to “the full spectrum of uses necessary to the ‘arts of civilization.’”

It is not difficult to imagine that an oil spill or a pipeline break upriver would threaten these water resources. Pipelines break. They leak. Oil spills.  It has happened in the vicinity of the Dakota Access in recent months. It is obvious that these accidents would threaten tribal water resources.  But North Dakota is unique in terms of western water law. The amount of water to which tribes in North Dakota are entitled has never been quantified, and as a result, one might argue that the Winters doctrine has, strictly speaking, never been applied to Standing Rock and other reservations in the state.

The efforts of the Water Protectors and their lawyers to obtain restraining orders to prevent the completion of the Dakota Access pipeline did not address these issues.  Nor have treaty guarantees and other matters received a full airing in court.  Needless to say, if the Dakota Access Pipeline is completed, and it is beginning to look like that is what is going to happen, many of the most pressing historical and legal question will not have received a full hearing.  And that, along with President Trump’s determination to undermine the Environmental Impact review, makes this episode even more disappointing and unfortunate than it otherwise might have been.