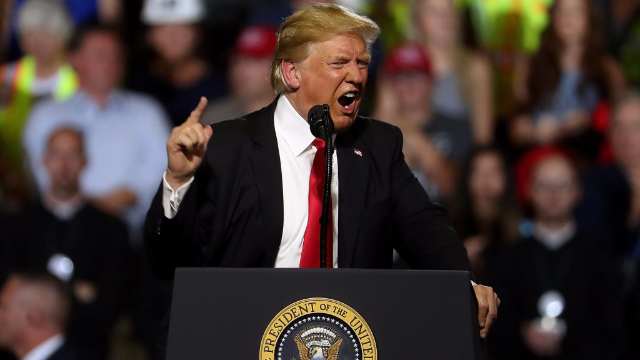 It has been a busy couple of weeks for our Bronze Creon.  But in the midst of taking a dump on the first sentence of the 14th Amendment, stirring up the Anti-Semites, White Supremacists, Nationalists, and Assorted Yahoo Dingbats, and campaigning for Republican candidates in several states, the President managed to sign a proclamation honoring Native American Heritage Month.  Presidents routinely issue these proclamations on or around Halloween.

Last year I compared President Trump’s first proclamation to those of his predecessors.  I found it wanting in several respects.  This year’s proclamation is little better, with more meaningless fluff largely directed towards bringing economic development to Indian Country.

Trump begins by reminding us that “during National Native American Heritage Month, we celebrate the legacy of the first people to call this land home.”  “America’s Native Americans,” the proclamation continues, “have fortified our country with their traditions and values, making tremendous contributions to every aspect of our national life.”  “America’s Native Americans”–what a strange possessive noun with which to begin that sentence.  Though the President has done little and accomplished little, and spent far more time bashing Elizabeth Warren as “Pocahontas,” than working on serious issues in Indian Country, he asserts that his administration remains “committed to preserving and protecting Native American cultures, languages, and history, while ensuring prosperity and opportunity for all Native Americans.”

The President’s proclamation is a celebration of Native American assimilation.   Native peoples are valuable, it seems, only for what they contribute to the public life of the United States.

But native peoples, of course, belong to native nations as well.  The President asserts that his administration “is committed to the sovereignty of Indian nations” but that seems to go no further than “ensuring economic opportunity from Window Rock in Arizona to the Badger-Two Medicine region in Montana.”  At the end of September, a federal court rejected the Obama Administration’s attempt to cancel mineral leases in this scenic region just outside of Glacier National Park, one full of culturally significant sites.  “By engaging with tribal leaders as representatives of sovereign nations,” the President proclaimed, “my Administration is working to find effective solutions to pernicious challenges, such as generational poverty. Our partnership is furthering economic development and advancing needed reforms.”  Unfortunately, this does not seem to extend much beyond drilling on Native American lands.

The President’s staff managed to include reference to some of the many challenges facing Indian Country, and touted its signing of legislation earlier this year recognizing six Virginia tribes.  The President closes with a claim that has been repeatedly belied by his administration’s actions:

Our Nation is proud of and grateful for its Native American heritage and traditions, including a history of innovation and entrepreneurship. The essential contributions of Native Americans continue to strengthen our American family and brighten our future together. This month, I encourage all Americans to learn more about American Indian and Alaska Native cultures as we celebrate and honor the many Native peoples who have given so much to our great Nation.

Two years into this disastrous administration, there is little reason to take seriously any of this president’s claims to want to help or support native nations.  President Trump’s Proclamation shows that his staff is willing to go through the motions, and that for him talk is so very cheap.