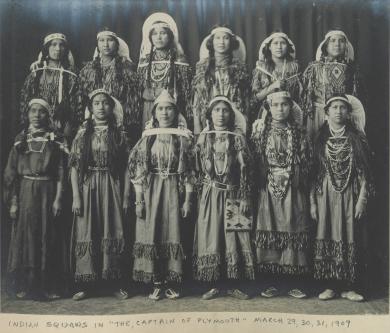 Julia Peña was part of the ensemble cast of The Captain of Plymouth.  Like Ethel Daniels, she played one of the “squaws” in the 1909 Carlisle Graduation pageant.

Julia, a “Mission Indian” from Southern California, had a lot of experience with boarding schools. At the age of 8, she began attending the St. Boniface Indian School in Banning. She was there from 1900 until 1907.  She spent one year at the day school in Pala, California, before traveling across North America to begin attending Carlisle in 1909.  It was a family affair. Julia’s older brother Nicholas had attended Carlisle from 1895 until 1905.  Years later, in 1913, he was known as the “best Indian farmer in Pala.”

Julia’s story is similar to that of the other young women who attended Carlisle, and who passed through Mrs. Jacobs’ house.  She was active in student organization at Carlisle, playing a leading role in the Girls Holy Names Society.  She performed in school plays, and attended sporting events from her outing placements when she had the time.  The year before she arrived at Mrs. Jacobs’ house, Julia wrote to one of her teachers, Miss Georgenson, to announce “that she has a very pleasant home near the Susquehanna,” and that “everything is so pleasant that a person just can’t help enjoying life.”

Some of her patrons were satisfied with Julia, and others were disappointed.  She stayed with the Engles family in Moorestown, New Jersey, from September 1909 until the end of August in 1910.  To Mrs. Engles, Julia was “not satisfactory.”  At times she did good work, but “at other times, careless, rude and impertinent, not honest.”  Julia had apparently stolen some things from the Engles. Because she apologized, the patron would keep her through August but no longer.  Another patron, one year later, though that Julia “is willing and tries.”  She was a good worker, but her vision was so poor that she needed glasses badly.  Once fitted, she wore her glasses all the time and performed much better work.  We don’t know what Mrs. Jacobs thought of her.

Julia, like most of Mrs. Jacobs’ girls, missed Carlisle once she left.  On her way home she sent postcards from the places she passed through to her former classmates and teachers. When she moved from Pala to San Diego, she continued to send postcards to her friends in Pennsylvania.  She sent to Carlisle a dollar so that she could join the Carlisle Alumni Association.  In April of 1915, now married and back in Pala, she wrote that “I am getting along very well at my new home. I used to live in San Diego, but I like it better here, as I am living on a farm. I am always glad to hear about the progress Carlisle is making, and I hope it will continue. I will close with best wishes for success to the Alumni Association, not forgetting all my classmates.”

Another student who left Carlisle, stayed in touch, and continued to support the school’s programs. Carlisle, as it did for Ethel Daniels and Esther Reed, made a huge difference in Julia Peña’s life.