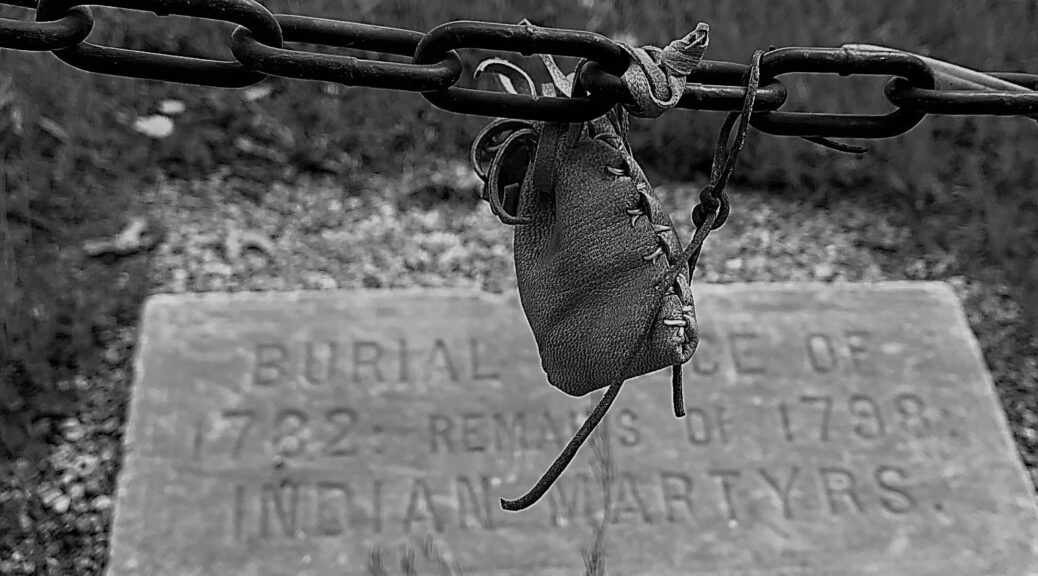 It was a long drive to Gnadenhütten. It was Thursday, last week, and the weather seemed cooler than usual. The rain fell for much of the drive from Rochester. It was a dark day most of the way as we traveled along the Lake Erie shore, and cut south into Ohio.

I listened to National Public Radio on the drive, searching for a new station each time I moved out of range of the one I had been listening to before. Stories repeated over the course of the day. Because different NPR stations run different shows at different times of the day, some stories repeated several times: the end of testimony in the Derek Chauvin murder trial, for instance, and his decision not to testify in his own defense; the arraignment of the police officer who killed Daunte Wright when she pulled out her pistol rather than the taser that she intended to use; and the killing of 13-year-old Adam Toledo by a Chicago police officer in a back alley. The child had been carrying a weapon, but when he turned toward the officer who pursued him–showing his hands as he had been instructed to do–the officer shot and killed him. Three people of color killed by white policemen dominated the news.

I am sure part of the problem is that police fear that everyone has guns. There are too many guns, and that needs to be part of the discussion about disarming or abolishing the police. Unless you are a hunter, you will never convince me that you need a gun. Owning a weapon is a choice made by those who want to control or threaten others or, for reasons I do not pretend to understand, those who need a killing machine to feel secure in their manhood, or for those who choose to live in fear.

Several months back, I dropped by daughter off at a gym about twenty minutes from our house. Attached to the workout facility was a large hockey center with a couple of rinks where youth leagues played their games. Because the workout lasted for only an hour, I always brought work, and waited outside in the car, doing reading for classes. One time I parked next to one of those over-sized pickup trucks that have become an all-too-common blight on our roadways. You have seen them, decorated with NRA stickers, or some form of The Punisher, or a blue line flag. The driver got out of his truck. He reached back in for something and as he stretched to do so, I could see that he was carrying a holstered gun on his hip. He pulled his black hoodie over belly, bullets and belt, and went inside to watch his kid play hockey, armed and ready for action. Many of the kids going into that rink must have been about thirteen.

Like Adam Toledo. I watched the video of his shooting, placed on an official Chicago website. It happened really fast. So fast. But he was shot and he went down and I saw the blood pouring out of his mouth or nose. I turned it off.

When we reached Gnadenhütten, right there beside the Tuscarawas River, the museum was closed. I called the two numbers on the locked door. The first went to voice mail. I dialed the second number. Tom answered. He drove over from his house, a very short distance away, let us in, and showed us around the museum. Lots of arrowheads. Lots of pictures of the site taken over the years since 1782, when American soldiers murdered the Christian Indians gathered there. Books that had belonged to the missionary David Zeisberger. But what really interested me was outside. The small grave where were buried the “martyrs” (to what cause?). A reconstruction of the Mission House. A site that echoes with the screams of children.

If we are to understand Native American history in all its complexity, I believe that we must confront the lacerating violence of events like Gnadenhütten. We must do so whether we are on the Right or the Left or in the middle.  I would contend that an honest rendering of this event would not differ widely on the basis of who taught it. We might differ in terms of its broader meaning. Last week, after a long drive, I saw it in the same light as I see the murder of George Floyd, the shooting of Adam Toledo, and the killing of Daunte Wright. Examples all of America’s long-enduring race war.

The frontier, we must remember, was a violent and at times a frightening place. No historian would dispute that, no matter what their politics, unless they chose to ignore the evidence completely. Many Anglo-American settlers living on war-ravaged frontiers simply could not trust their Indian neighbors. Settlers in the Ohio country, for example, experienced the horrors of warfare just as did Indians. Some of them witnessed the death of friends and neighbors in Indian attacks. More of them heard horrifying stories of Indian attack. These settlers had occasion to fear Indians. They acted, with violence and decision, to save themselves.  But settlers found in their fears justification for horrible acts of terror. They could, as did Ohio country settlers in 1782, conclude that the singing of psalms by Christian Indians at the Moravian mission at Gnadenhütten was not the pious expression of praise to the One God but the ranting and boasts of savages who had wet their hands in the settlers’ blood.

Native peoples had their own fears, of course. When Kentucky militiamen attacked a cluster of villages in northern Indiana where Potawatomis and many other native peoples lived, they threatened them with extermination. If native peoples refused to make peace, Brigadier General Charles Scott said, “your warriors will be slaughtered, your towns and villages ransacked and destroyed, your wives and children carried into captivity.”  Read Jeffrey Ostler’s excellent piece in the William and Mary Quarterly from 2015 and his more recent award-winning book.  Indians feared genocidal violence from white Americans, and you cannot miss the expressions of that genocidal intent in the writings and statements of American officials. Words and deeds combined, a frightening mix. Many native peoples who lived in the Ohio country saw in the United States and its citizens, whatever its claims to desire peace, an existential threat to their existence. Gnadenhütten. The white soldiers, these guardians of their communities, held a vote on whether or not to kill the 100 Christian Indians they had taken captive. This was, for native peoples, American democracy at work. As the Christians sang the last hymns they would sing, savage militiamen began to murder them, thirty men, three dozen women, and thirty-two children in all. Kids. Almost three dozen.

Tom, the guy who drove over to open up the museum, gave me a pamphlet reproduction of “The History of the Gnadenhütten Massacre,” written in 1843. It tells the story of the “Blackest Page in History of Northwest Territory.” It opens with a poem:

The pamphlet closed with the following:

May the memory of our red brethren, who at Gnadenhütten sealed their faith with their pious confessions of the Savior in their sufferings, their meek endurance, and triumphant Christian death, bear testimony to the Truth as it is in Jesus, as long as the memory of the atrocious deed shall last.

Just a couple of blocks away, in the center of Main Street, the head of the “Brave” who serves as the mascot for Indian Valley High School is painted in the middle of the intersection. Images inspired by James Earle Fraser’s “End of the Trail” sculpture appear at the entrance to the site and on a hardware store on Main Street. The large obelisk at the site of the Gnadenhütten massacre indicates that the Indians were victorious in their deaths. But they weren’t, were they? They lost before the lost everything. Statements that they prevailed over their murderers might make white people feel better, that the pious converts “went to a better place,” and you can believe that if you want to. I am inclined to believe that they were slaughtered, tossed in a mass grave, under a small mound that stands feet a way from the small gravel parking lot, surrounded on three sides by the graves of the village’s white residents. It is such a sad, sad, place.

I am so conscious that what I do as a historian and educator is viewed with suspicion by those who do not share my political beliefs. I have been told that I teach “children” to hate America, that I emphasize the negative rather than the positive aspects of American history. There is a student at my college–in my classes–who has made himself a polarizing figure on campus by loudly and stridently proclaiming his contrarian conservative politics. Among many things, he has accused those who teach him of being Marxists, Anti-Christian, Anti-American and, implicitly, demonic.

I was tired by the time I arrived at Gnadenhütten. We still had a couple of hours to go to get to Cincinnati. For me, it is a place that forces reflection. What else can one do while standing on the ground where American soldiers murdered nearly a hundred Christian Indians?

The locals remember the massacre at Gnadenhütten as a black mark in their history. But in the small museum on the site, there is little real discussion of the horrible crime itself. There are relics–a large collection of arrowheads harvested from farmers’ fields once worked by Shawnee women. There is plenty of information about the mission and the missionaries. But far less about the murders that took place a short walk from the front door. You learn who lived there, but not how it was that soldiers felt the need to slaughter children.

We thanked Tom for letting us in to the museum. We thanked him for his time and his hospitality. We dropped a small donation in the box, and walked back to the car. I am glad we stopped. I am glad we called him and took him up on his invitation to show us the collections. I took a last look again at the grounds, walked once more around the burial mound. Then I got back in my car, started the engine, and drove away. We saw the giant warrior’s head in the center of Main Street. The hourly news update came on before we left town, indicating that city officials in Brooklyn Center expected another night of protest in the aftermath of the killing of Daunte Wright, the latest battle in a race war that has gone on seemingly without end.