Yesterday one of my very good students told me that he was driving through New York’s Finger Lakes region, not all that far from my campus.  He was enjoying a nice spring day, noticing the signs remaining from the heyday of the Anti-Indian group Upstate Citizens For Equality, and listening to one of the blowhards on right-wing radio.  Slim pickings, sometimes, in the Finger Lakes.  Whoever it was that he listened to argued that Native Americans need to move on and “Get Over It.” Stop whining and stop complaining. The injustices they suffered occurred a long time ago.

It is the end of the semester here at Geneseo.  All of us, I suspect, students and faculty alike, are limping into finals week.  The weather is turning nice, the flowers are blooming. It is difficult sometimes for students to focus on schoolwork. I get this.  The last reading I give to the students in my American Indian Law and Public Policy course is Harold Napoleon’s essay, Yuuyaraq: The Way of the Human Being.  It is, in places, a beautiful book, but a small number of my students were pretty hard on it. Disappointingly so. 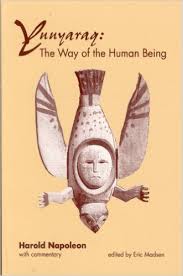 Napoleon, a Yup’ik, wrote his essay in the late 1980s from a penitentiary in Alaska.  During a state of intoxication that he cannot remember, he killed his child. Napoleon wondered in Yuuyaraq not only how his story ended in prison–college-educated and capable, he had served his community by holding a number of leadership positions–but the larger story of what had happened to his people.

Yuuyaraq was, for Napoleon, a beautiful way of living. Indeed, his essay directly inspired the historian Calvin Luther Martin‘s beautiful but flawed meditation on the experience of native peoples in a book he wrote, also entitled The Way of the Human Being.    The human beings lived in a world in which they interacted with a range of spiritual forces, malevolent and otherwise, and a host of human and other-than-human beings. Ritual allowed this world to work.  Hunters made requests; hunters treated the animals they pursued with courtesy and so long as the animals were accorded the proper respect, no misfortune could befall the people. (Gregory Evans Dowd twenty-some years ago did a wonderful job of showing how these beliefs informed native peoples’ conduct and understanding of the cosmos in the first chapter of A Spirited Resistance, a book I sill assign in my classes).

to present this world of ritual and spiritual power in the opening chapter of Native America.  It is a world where native peoples paid close attention to ritual in order to deflect the wrath of malevolent forces whose ire could spell ruin for indigenous farmers, hunters, and warriors.

You also cannot miss when you look at these accounts how fragile all of this was.  Epidemic diseases tore gaping, jagged holes in the fabric of native community life.  For Napoleon’s people, the experience was a relatively recent one.  He writes of what his elders called the “Great Death,” which struck Alaska Native communities at the very beginning of the twentieth century.  60% of the people, the real human beings, died.

Wreckage. That is what Napoleon describes, and it is a painful read.  Other native peoples, whether recorded in white sources or in their own writings, have described the resulting chaos and pain in similar terms.  I think here of David Silverman’s searing portrait of Christian Indians in central New York who, when their white neighbors celebrated their independence from Great Britain and acted on their voracious appetites for Indian land, became convinced that they were a people cursed by God to suffer for all of eternity.  Or spelatch, the term Skokomish artist Bruce-subiyay Miller used to describe the world of change that came to his people after the arrival of Europeans.  The Skokomish “fell into disarray,” Miller wrote, his ancestors’ experience akin to that of “a shipwreck where everyone was trying to find something to cling to, to save their lives.”  As with Napoleon’s people, many turned to alcohol.  Some tried to assimilate, or turned to Christianity.  All of them struggled, for they found that “the things that they venerated, that gave them their vital life force and their strength for survival, suddenly were condemned as evil.”

A small number of my students, four out of the thirty in the class, thought that Napoleon was blaming the victims, but they badly misread his work.  The epidemic produce 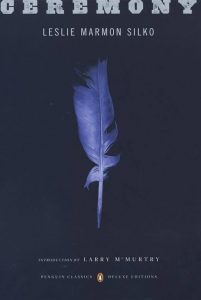 d wreckage that most of us, mercifully, can only struggle to imagine.  The epidemics destroyed Yuuyaraq.  The survivors, Napoleon said, with their traditions , their customs, their networks of kin, and their very way of comprehending the cosmos destroyed, began to listen to missionaries who described their culture as sinful and demonic, their ways of living wicked.  Napoleon clearly did not blame the converts.  They were trying to get by, to make sense of a horrifying new world.  He described his people as victims of something very much like Post-Traumatic Stress Disorder, as victims of “cultural genocide” and a historical process that he described as “evil.”

When I teach Napoleon, I think often of the long poem that runs through Leslie Marmon Silko’s masterful novel Ceremony, which in its manner conveys something very powerful about the historical processes described in Yuuyaraq.  If you have not read it, you must. Though a work of fiction, Ceremony can work well in a history class. If you are a student, you can learn much from Silko about the horrifying new world the arrival of Europeans created for native peoples.

In the novel, Silko’s witches begin to duel, and conjure a horrifying vision.

there were no white people in the world

there was nothing European.

except for one thing:

Silko’s witches told the story of the arrival of white people on American shores.  It was a horror story, for these newcomers

grow away from the earth.

Then they grow away from the sun

then they grow away from the plants and animals.

They see no life.

they see only objects.

The world is a dead things for them,

the trees and rivers are not alive.

The deer and bear are objects

They see no life.

They fear the world

They destroy what they fear

The white people would bring a New World to native peoples. The newcomers, Silko’s witches warned,

will kill the things they fear

the people will starve…

They will fear what they find

They will fear the people

They will kill what they fear

Entire villages will be wiped out

They will slaughter whole tribes.

There were survivors, but they struggled with the horrifying consequences of this witchery.  Napoleon told his story, after all, from a prison full of Alaska Native who suffered from what one recent report labeled “Intergenerational Trauma.”  Martin, who taught at a penitentiary during a portion of the time he spent in Alaska, met men and women who found themselves incarcerated after committing horrible acts they could not remember.  They were struggling to carry the burden imposed by a legacy of unresolved grief.

Napoleon proposed solutions. He was not an expert, he claimed, nor a wise man.  But he had seen a lot and experienced a lot.  Talking circles, to open up, to restore shattered bonds, to heal.  It is hard to disagree with what he suggests. He was a humble man, and he has continued to struggle to meet the challenges communities like his face since he was granted parole.

Still, the problems remain.  In Canada, too, as the enduring epidemic of suicide in Nunavut attests.

Trauma.  An absence of well-being. Communities still struggle.  Get over it, they are told.  These are the words of white critics who are racist and stupid, and they can be dismissed as such.  But what to do?  In the United States, much of the talk about Native American communities focuses on economic development, sovereignty, self-determination.  Like justice, democracy and pizza, everyone is for these things, but what, really, do they mean?  And with the measure of self-determination and sovereignty determined by the governing structures of the settler state, or decided, as Roger Echo-Hawk put it in his too-long book of several years ago, in “The Courts of the Conqueror”?  How much can the governments of settler states do? What are they willing to do?  How much can their experts achieve?

Napoleon argued that communities needed to solve their own problems, to forcefully advocate for themselves to pursue changes in government policy but also to deal with the grief and heal.  In Wasase, Taiaiake Alfred, (who my students read as well) laments the limitations imposed by leaders who all-too-often act just like white politicians, administering the programs and policies put in place by the settler state.

Alfred, Napoleon, Martin–they are describing communities in the midst of complicated problems, and if we do not force our students to confront them we do a disservice to them as historians. Grief is a force in Native American history.  Read a bit, and you will find it hard to miss.

I know my students sometimes are asked why they are studying this or that field in the liberal arts.  What good is that? I’m willing to bet that if you are a student, you have heard it, too.  Maybe on our post-truth, alternative-fact world, history is not worth much to many of our leaders, but if we keep our eyes and our hearts open, and read with discipline, energy and compassion, we can arrive across the distance of time and geographic space at something close to understanding.  And that is no small thing.