We’ve come to that point in the semester where I begin to see on Twitter and on Facebook and elsewhere “bloopers,” students’ answers to questions on their midterms or finals that are so wrong that their professors or teachers find them funny.

I would urge you to think twice before you post things like this, for those student bloopers may reflect more poorly on you as a teacher than it does upon the young people enrolled in your courses.

When I began my teaching career back in the mid-1990s, my first tenure-track job, I shared space in a department with two former “Jeopardy” champions  Our offices were small, and a packed in closely along a strip 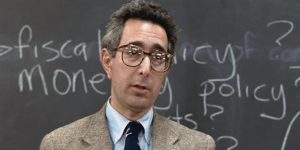 of contorted hallway on the eighth floor of the college’s Liberal Arts building. I could overhear the conversations in other offices. And I can remember one of those Jeopardy champions meeting with a student during office hours to review for an upcoming test.

“Abraham Lincoln’s first vice-president was?” I can remember him asking.

Dead silence.  Nothing.  The poor student did not have a clue.

And so it went. And nowhere, in any of this, did the most important question of all appear: Who cares? So what? Why should I, some kid enrolled in a general education course I have to take to complete my requirements, care about Hannibal Hamlin? In what ways did he, or his vice-presidency, matter?  My colleagues tested students on how well they could memorize facts that, by themselves, meant little, and mattered less.

There was in that department as well a Missouri Synod Lutheran Pastor, who divided his time between his church and the department, and who used to brag that being a college professor was “the best part-time job in the world.”  He gave his students multiple choice exams, with one of the choices a joke, a crazy answer that he liked to think was funny.  He liked to share his exams with me.  He thought they were funny in the way that people who do not know how to tell jokes think things are funny.  When his students chose, for example, “D: A Heavy-Metal band” as an answer to the question, “What was the Black Death?” he would laugh at their lack of knowledge.  He couldn’t believe, he said, that the students would fallen for this and he would shake his head in dismay at their ignorance. “Kids these days,” he may as well have said.

No, I thought.  You have it all wrong. Both of my colleagues had it wrong.  It was possible, it seemed to me, that students do not know who Hannibal Hamlin is because you did not convince them that this individual mattered, that he lived a life that they ought to know something about.  Or that the lectures and the notes and the memorization of facts, or the mammoth textbook you assigned, sucked all the life out of a subject that is so inherently interesting when taught with passion, planning, and attention.  Or, perhaps, they may have chosen to identify the Black Death as a metal band because you failed to convey to them the significance of this event.  You may not have interested them in the topic. The students may not have cared about what you told them.  That is sad.  They may not have cared about you.

I cannot criticize students for this.  I encourage my students, as they read the books I assign, or listen to our discussions, to ask themselves and to ask me, “So What?”  If I cannot handle that challenge, then I am not fit for this line of work.

I have been teaching a long time.  I have worked with some truly wonderful colleagues, committed, dedicated, and creative teachers.  But there are those who quiz their students, to keep them honest, to give them an incentive to do the reading that these instructors believe they would not otherwise do.  Others offer exams that serve no purpose other than to demonstrate what students do not know or, perhaps, what the instructor failed to teach them.

I hated exams when I was a student. It was not because I did not want to work.  I loved history.  Even before I declared it as my major. I loved the work in the library, and the reading, and the discussions.  I can remember the first primary source from the library’s special collections that I held in my hands, a pamphlet written by the interesting Pennsylvania loyalist Joseph Galloway. It is important for those of us who teach to remember what drew us to this field in the first place. Every historian I know is a voracious reader. Yet I know of no historian who reads for enjoyment a textbook.   But I prepared for the exams. They caused me stress.  I memorized what I was expected to memorize.  I saw students who knew the material as well as I did at a conceptual level choke, or have a bad day.  And I know that I never learned a single thing taking an in-class examination.

Instead of trying to find out, in effect, what our students do not know, it might be better to assess them in a way that allows them to show what they do know, and to demonstrate how thoughtful and creative and worth listening to that they actually are. One of the greatest parts of this job is the opportunity it provides me to be inspired by and learn from my students’ insights.

In my nineteen years at Geneseo, I have never given an in-class exam.  I have never used a scan-tron form or a blue-book. I give students take home projects, short papers, really, and give them a week or more to work on them.  Some of the questions that will be appearing soon on the Resources page of this website are ones I ask my students in the Native American survey course. In my humanities course, in which the students read works from Antigone to Hamlet, I pose for them big questions.  Recently, for instance, I asked the students to reflect on Roger Rosenblatt’s essay that appeared in the Atlantic last year, an essay I have remarked upon for this blog in the past. It is a harrowing depiction of the capacity of human beings for evil and violence, but also about the possibility that beauty, and love, might survive even our darkest moments.

The strongest essays show me students who are thinking deeply, wrestling with huge questions, and who are striving to understand the great works that they have read.  I can see from the essays that the students took the assignment seriously, and I can see not only that the books I assigned mattered, but how they mattered. I think back to the best of these answers often. I think of the non-traditional student, a bit older than his classmates, coming back to make another try at college after spending time with the Army in Iraq. I have mentioned him in this blog before.  I could see him working through his wartime experiences as he wrestled not only Rosenblatt’s observations, but with Thucydides’ admonition that “war is a violent teacher” and the call in the Gospels not only to love our neighbors, but our enemies as well. Or the student, a volunteer in a hospice, now on her third or fourth major, fighting her own demons as she wrote an essay that moved me to tears.  Or the guy from some part of Francophone Africa, arrived in nearby Rochester through one of the refugee resettlement programs, who described the slaughter of his own family as he struggled to understand what was worth fighting for, dying for, and perhaps killing for.   And the kids with the more comfortable or conventional backgrounds, who are turned on by a text, whether Augustine’s own struggles to define who he was as a young man, or Antigone’s decision to resist an unjust law, or Cicero’s command that the man of virtue must serve the commonwealth, even when that service offered the frightening prospect of criticism or condemnation.

My point is that I learn a lot from these essays, and I am a guy who still has much to learn.  I rethink my own beliefs and assumptions about the texts I assign based on what my students write. I reconsider how I teach them. I see in them things I had not seen before.  I learn.

If this is not your experience, and if you are one of those professors out there who likes to post student bloopers on Facebook or Twitter, or even if your default position is one where you assume that the kids know little and care less, I would urge you take a good, long, look in the mirror. I love history.  If you are bothering to read this, there is a good chance you do, too. Many of our students have been taught by over-worked and underpaid teachers, racing to cover as much material as their states require for their students to be able to pass whatever standardized test awaits them at the end of the year.  I have watched my own kids as they take their high school history classes.  Watching them work through their assignments–the busy work and regurgitation and memorization–I would not blame them for a second if they did not like history as a subject.  In my mind, it is not at all unreasonable for these students to expect us to sell them on the significance of what we do, on why it all matters. We should not shy away from this challenge. And if you are concerned by your students’ shaky grasp of the facts, or bothered that they do not know things “that every informed citizen should know,” you might be asking the wrong questions. Before you laugh, consider what you are doing.  Facts are important, but they are only the most basic building blocks of history, and they have little value without creativity, interpretation, and imagination.

And here’s a final point.  When you laugh at student bloopers, you come off as smug, arrogant, and a bit of a prick. I doubt you would laugh about that student’s answer with that student sitting right in front of you.  Teaching matters. It is hard work. It takes great effort to do it well.  The failure of your students might be, at least in part, a failing on your part as a teacher.