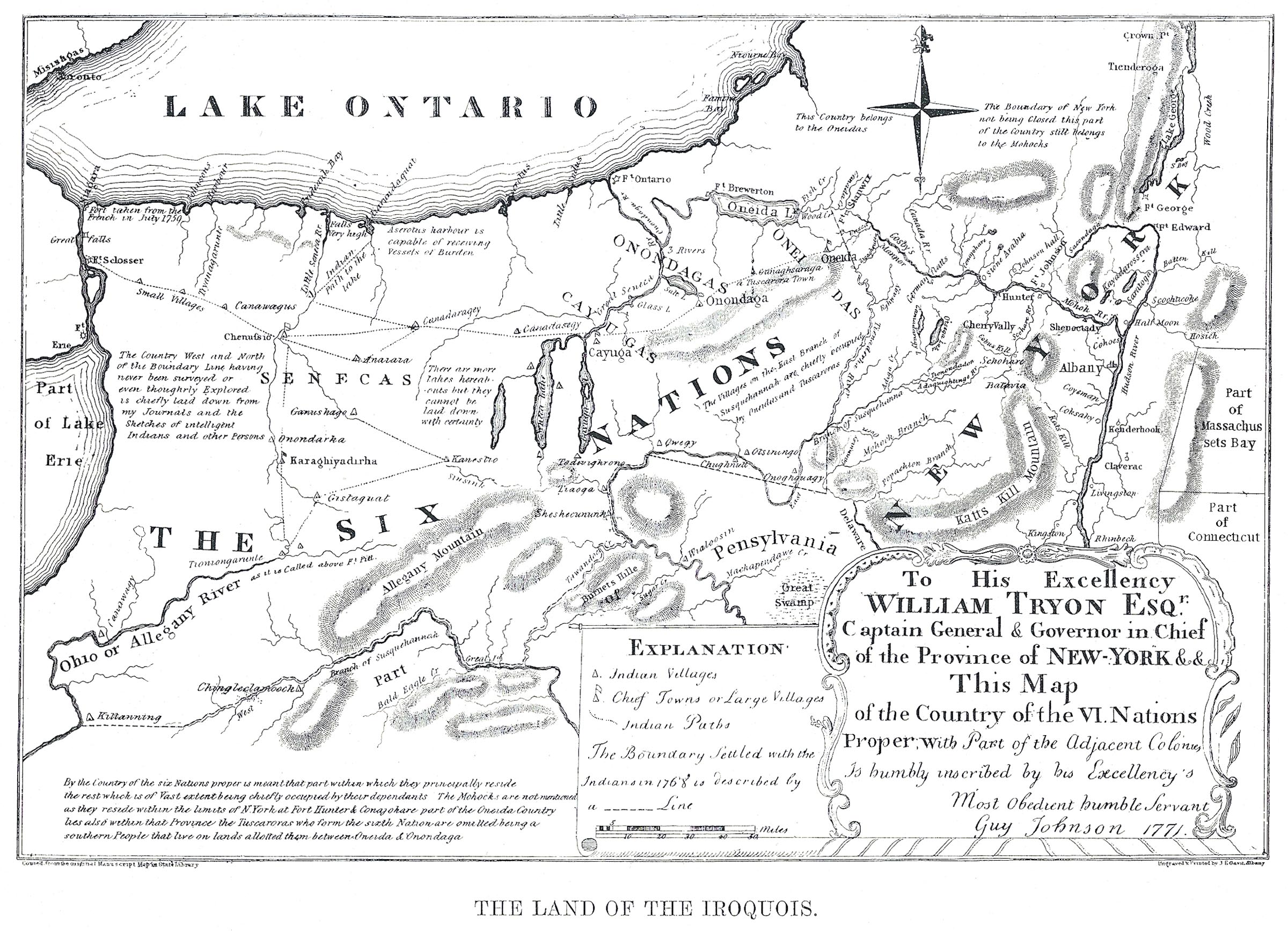 This past weekend, I flew to Atlanta to participate in the conference hosted by the Consortium on the Revolutionary Era. It was, as I indicated in an earlier post, the first time I presented any of the research from my current project to an academic audience.

I was part of a round table discussion called “Indigenizing the American Revolution.” While some of the panelists presented rather straight-forward papers, my goal was to suggest some changes in thinking about how we approach the Revolution, and to provoke some discussion. What follows is a distillation of what I said.

I spend a lot of time talking about the American Revolution with students who know less about it than they should, or whose understanding of the Revolution is ensnared in so much myth and legend that, despite their considerable interest, and infectious enthusiasm, they sometimes have trouble separating fact from fiction. In New York schools, if they learn anything at all about native peoples and the Revolution, it is the long-since discredited “Iroquois Influence Thesis,” which like all things from the ‘80s, still has a few remaining adherents.

When I have a class in front of me, and I will be teaching the Revolution again in the fall for the first time in what seems like a long time, I begin by asking the students a number of questions: What was the Revolution? When was it? Where was it? Why was it a thing? And Who was it?

Let me be clear: I teach in western New York, in a picturesque village built over the burned remains of the Seneca town of Chenussio destroyed during the Sullivan-Clinton campaign of 1779. The Groveland Ambuscade, the site of an actual battle involving Tories and Senecas attempting to pick off an advance party sent by Sullivan, sits near the campus, as do grisly and myth-encrusted sites associated with violence committed upon whites like the Boyd-Parker torture tree. There, the story goes, two of Sullivan’s scouts were tied with their own intestines by “savage” Senecas. The sites we commemorate in the vicinity of Geneseo, then, are sites of indigenous violence where white people play the starring role. Meanwhile, the sites of the burned Seneca towns are less well-known, their stories seldom told. As a result, even at a college that sits near the site of Chenussio, the answers students provide to my questions almost always do not include native peoples.

So to fix this problem, to indigenize the American Revolution, we need to construct from the surprisingly rich and abundant sources new narratives about the Revolution.  Despite the fantastic work being done by so many of our colleagues, this won’t be easy to do, and those of us who work with educators and local historians can expect some push-back and resistance. We must, after all, ask them to redefine and replace in important ways a story that has become comforting and familiar for one that is unsettling and disturbing.

Still, if you will allow me, very briefly, I will try to provide some answers to these questions, inspired by this idea of indigenizing the American Revolution. These answers I base upon my current research project, a history of the Onondagas from the time when that young woman fell through a hole in the sky to land on Turtle’s back to something very closely approaching the present. It’s a big project, of which this is a small but important part.

For the Onondagas, there were no grand constitutional questions at stake in the Revolution. For them, it did not reduce to tidy dualisms like the questions of “home rule” or “who shall rule at home?” A conflict between Tories and British Regulars, American militiamen and Continental soldiers, that they hoped to avoid became for them a fight for survival, a nightmarish series of raids and counterraids that resulted in the burning of their town in the spring of 1779 by Goose Van Schaick, the death of Onondaga soldiers, and the rape and murder of Onondaga women and children. It marked the beginnings of a diaspora, the effects of which native peoples still feel today, and that the forces of colonialism have in very meaningful ways inscribed on the very geography of New York and two Canadian provinces.

When was it? Obviously that question becomes more complicated when we attempt to indigenize the Revolution. The Onondagas’ revolution does not fold easily into the time frames familiar to most historians.  The Revolution unleashed upon the Onondagas’ territory hordes of land-hungry settlers, avaricious speculators, and government agents determined to gobble up and seize control of their estate, their lands, and the valuable Onondaga salt springs. The same people who encroached upon, speculated in, and obtained through fraudulent means the Onondagas’ lands were the same men who called for the burning of their town and the destruction of its people during the war. The Onondagas’ revolution continued long after the fighting stopped. Onondagas moved between the British post at Niagara, and then Buffalo Creek, Grand River, and Onondaga, and other places still, struggling to hold together their communities in the aftermath of revolution, warfare, disease and dispossession, and they continued that struggle long after the “Miracle at Philadelphia” or other conventional signposts that mark the end of the revolutionary era. Indigenizing the Revolution requires us to step outside from Anglo-Centric and nationalist chronologies.

And geographically, too, when we consider “where” was the Revolution.  The Revolution, after all, did not occur solely in the Urban Crucible, or simply break into the backcountry, or follow the marches of Redcoats and Continentals. No, the Revolution occurred as well in the settled towns and villages of what imperial map-makers, even on the eve of the Revolution, knew to be Iroquoia, the “Land of the Six Nations.” That geographic entity that today we call “New York” took shape through a process of Revolution, and New York quite simply could not have become the “Empire State” without a systematic program of Iroquois dispossession unleashed by Revolution. Transforming indigenous land into American states was a critical part of America’s “revolution settlement,” and the Onondagas paid enormously the price of American freedom in 1788, 1793, and 1795, to name just their eighteenth-century cessions, all of which can justly be considered rife with fraud

Viewed in this manner, the cast of characters expands dramatically.  If we give to Onondaga, this Native American capital city, the same level of analysis historians like Robert Gross have given to Concord, or Benjamin Carp gave to the seaports, we naturally begin to see the Revolution as something other than a constitutional struggle, a military conflict, or the story of the creation of the American Republic.  The Revolution came to different communities in different ways, and Native American communities deserve the level of treatment non-native communities have received. That is what I will attempt to do in my book. As in Gross’s Concord, the Revolution at this local level becomes something larger and smaller at the same time, something greater and lesser. It includes the story of a war fought from the Niagara to the Catskills, of families that fled to the cold fields and mass graves outside British Niagara, and on to Buffalo Creek, who only returned to Onondaga proper after 1838 and perhaps the most corrupt Indian treaty in the history of the United States. It included Onondaga refugees and Onondagas who stayed behind, Onondagas who fought to avenge the destruction of their town, the capital of Iroquoia, and those shattered by the weight of total war. When we indigenize the Revolution, the patriots remain in the story. Of course, but they look less like men of principle and more like schemers who will say and do anything to get their hands on Iroquois land.

That leaves us with “Who.” Who shall we include in the story of the Revolution? Haudenosaunee leaders like Joseph Brant obviously dominate those narratives that examine the Iroquois experience during the Revolution. Stories of Native American elites can serve as a reversal of the all-too-common “Founders Chic” genre. No Onondaga, however, left even a fraction of the documents Brant, or Red Jacket, Cornplanter, Good Peter or other well-known figures left behind. But the stories are still there, scattered across the archives and collections. Ordinary Onondagas, like the ordinary people of Concord who watched British imperial policy, who watched British soldiers search their town, and who marched own to meet them at that famous bridge, literally made history with the decisions they made during these challenging years. The documents exist. We can know the names of those Onondagas who remained at Onondaga after Van Schaick’s raid, and we know the names of many of those who fled to Fort Niagara, and then went on to Buffalo Creek and Grand River, both locations that saw rekindled Iroquois League council fires. At a fine level of detail, and with the patience that archival work requires, we can reconstruct the lives of some of the people who spent time in these communities, men and women whose lives were shaped and altered by Revolution, and whose stories ought ot be as central to that history of those whose stories have been told many times before.

2 thoughts on “Indigenizing the American Revolution”