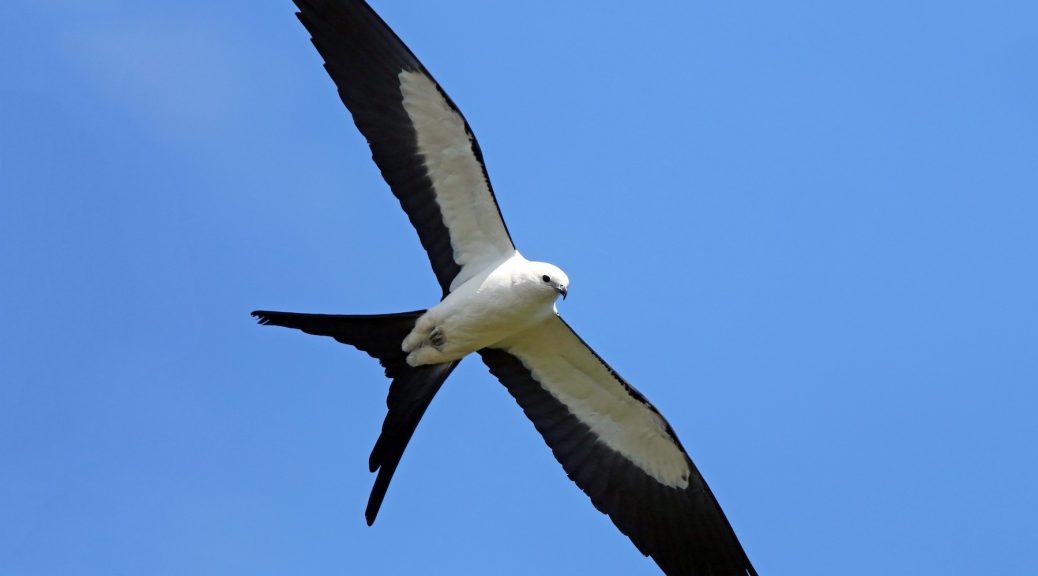 There was a period several years back when I can remember feeling deeply unhappy. I was living in Houston’s soulless suburbs, on the margins of a city I did not yet know, having a relocated for a job that I was beginning to think was not quite right for me.  I went for a walk, and I saw above me a bird that I later learned was a swallow-tailed kite.  I had never seen a bird fly like that before. It was stunning, and, for reasons I cannot fully explain, it put me at peace. It was a rare feeling and that moment, ten years ago, remains important to me.

I have just finished a month in Oxford where I taught my college’s required Humanities course to a group of nine students, all of whom are from New York State.  It’s a course I love teaching.  I have written about it on this blog before. In a number of ways, teaching it revitalized my career.  But the course can also be a downer.  The readings are heavy.  We attempt to find in Antigone’s refusal to heed an unjust law, and in the defiance that brings about so much destruction, some semblance of meaning; or in the Melians’ futile resistance to the monstrous tyranny and massive injustice of the menacing Athenians; or in Jesus’s fears in Gethsemane as he approached his martyrdom, and the cry of abandonment that came at the end of his life; or in Augustine’s troubled quest to account for the evil he saw in the world around him. There is viciousness, violence, injustice, and despair.  They course through the readings like blood. I punctuate these readings with poetry, and stories yanked from today’s news.  They show that the questions these texts raise we have not yet succeeded in answering.

I end the course with two readings: Martin Luther King’s “Letter from a Birmingham Jail,” and Robert Rosenblatt’s “The World is a Thriving Slaughterhouse,” a text I have discussed here many times.  King spoke about law, power, and injustice, and how to act when confronted with an unjust law.  He did so knowing, in his heart, that he would die a martyr to the cause so closely identified with him.  Rosenblatt looks at thirty years of his life as a war correspondent, as a witness to humankind’s seemingly endless capacity to serve up despair, violence, and pain.

During the month I have been here, the President of the United States has stoked up racial and religious hatreds.  He told four congressional representatives, all women of color, all of whom are citizens of the United Sates, to go back to the countries they came from.  In an earlier outburst Trump referred to these parts of the world as “shithole countries.”  The President is a white nationalist.  He is a monster, but the greater monstrosity has always been that sixty-two million Americans voted for him, and they did so with their eyes wide open.  They knew what they were doing. The problem, then, has always been bigger than Donald Trump. All the problems are bigger than Donald Trump. I saw that, from across the Atlantic, as I watched an audience in North Carolina stroke the President’s boundless ego and join in a chant calling for the exile of Representative Ilhan Omar of Minnesota.  “Send her back,” they yelled.

It was a sickening display. Some politicians said things along the lines of, “this is not who we are.”  I suspect most historians who write about Native American history, or about the history of African Americans, would join me in disagreeing.  That crowd in North Carolina showed the racism that has lived for so long, secreting its hateful bile. This evil metastasized long ago.

And the hits kept coming. A white nationalist shot up the annual Garlic Festival in Gilroy, California, the site of which I drove by more than a few times when I lived in California.  And during my last weekend in England, two killers in one day opened fire in El Paso and Dayton, killing thirty-one people between them. One of the killers was a racist who hated Mexicans, and who absorbed the President’s rhetoric in his “Manifesto.” The other appears to have leaned to the left, based upon tweets he liked, but displayed the toxic masculinity we now associate with so-called “incels”: women who knew him feared him.  He kept an enemies list and a rape list.  Texas Senator John Cornyn, a man whose spinelessness makes Lindsay Graham look like Lincoln, gloated when he learned that the Dayton killer was, refreshingly, not a white nationalist.  “The Dayton killer was a left-winger,” Cornyn tweeted, “but don’t blame Senator Warren.”  Just weeks before he had tweeted out his fear that the Mexican population was outpacing that of White Texans at a rate of nine to one.  Blood and soil.  Cornyn may as well have tweeted “the Mexicans will not replace us.”

Decades from now, the historians of the future will look at Cornyn’s tweets and say, “What an asshole.”  Because the problem is not partisan blame games.  It is guns. No place on earth makes it as easy as the United States for those who hate to kill.  I tried to make this point some time back when I wrote an angry manifesto after the slaughter of innocents at Parkland. A couple of days ago I thought that maybe I should revisit it, because of the prevalence of white nationalism and racism in the recent shootings.  But that misses the point, for the racism has always been there, as Eddie S. Glaude pointed out in a powerful, two-minute long history lesson on MSNBC. Ours is a country steeped in racism, built on stolen land with labor from stolen and enslaved black bodies.  The better angels of our nature have appeared from time to time, but they have never banished the fundamental evil at the heart of our history.  In a beautiful tribute to the writer Toni Morrison, who died this week, Damon Young said that her importance rested in how she “articulated the truth of America’s amniotic fluid. What we’re really swimming in. What we’re really swallowing. What we’re really choking on.  And when that sting is burning your eyes, who has any space left for a lie?” I feel this observation deeply.

So I stand by what I wrote in my own manifesto.  I have followed the news since the massacres in Texas and Ohio.  The Lt. Governor of Texas said something stupid about how the shooting might not have happened if there were prayer in schools, even though Texas has a moment of silence at the beginning of the day and prayers at school functions like sporting events.   Others have trotted out equally spurious, but predictable explanations for the carnage:  violent movies, violent video games, homosexuality and the presence of transgendered people, Colin Kaepernick (somehow).

I do not think any of these explanations are funny.  They are either dishonest or dangerously and obscenely stupid.  In any event, they are dangerous.  I do not care why you want to kill. It does not matter to me in the slightest.   A white nationalist and a racist? An “Incel”? A Nazi, or a revolutionary or an End-of-Timer or a sullen kid or a sociopath? I could not care less.  Because no matter who you are, and no matter who you hate, I do not believe you should have a weapon of war at your disposal.  You have no right to kill, and no matter your irrational fears, your macho fantasies, your martial cosplay, or your fevered dreams, there is nothing you can say to convince me that there is a place for killing machines in a civil society.  Some of you will trot out the 2nd Amendment.  Screw you.  Bearing arms does not mean what you think it does. Some of you will invoke your Christianity.  Show me if you can one line, from the first verse of the first chapter of Matthew to the last line of Revelation, that in any way justifies violence.

Look around the world. There are violent video games and violent movies all over the place.  There are many countries where almost nobody prays, where far more people identify as Atheists than in the United States.  They do not have mass killings.  40,000 people die from gunshot wounds in the United States each year, whether from suicide, accident, or homicide.  That comes out to one death roughly every fourteen minutes. To those who say nothing needs to be done, that your rights are sacred, and that guns are not the problem, I ask you how many more deaths will it take before you concede that this is wrong.  50,000? 100,000? A million? When and where will it end?

I believe firmly that this man-made and entirely preventable slaughter will soon consume us.  I feel it coming closer.  My father-in-law, who I have not seen in years, shops regularly at the El Paso Wal-Mart.  The slaughter in Thousand Oaks is not far from where I grew up.  I felt it approaching when my daughter messaged us that an active shooter was on her campus, though it turned out to be a false alarm. Thoughts and prayers.  From Melania and Ivanka, from the President and from Mike Pence and scores of Republican lawmakers.   They offer their prayers. The words of Isaiah come to me, as he confronted the hypocrites whose empty prayers, he said, meant nothing to an angry God.

The readings I assign are dark.  I know that.  I can see the students’ reactions when I give them news stories that raise probing questions about our violence and viciousness. As an antidote at the end of the semester I hand out Jack Gilbert’s popular poem, “A Brief for the Defense.”  “To make injustice the only measure of our attention,” he writes, “is to praise the Devil.” I know I do not always practice what I preach.

I walked a lot during the five weeks I spent in England.  Eight, nine, sometimes ten miles a day or more. It was a way to escape from the tourist hordes crowding the center of Oxford, but also to have some uninterrupted time to think. On many of these walks I saw red kites, an English cousin of the bird I saw swirling high above the Houston suburbs. It flies beautifully, with an assuring grace.  I found myself watching these birds, and I could have stood there for a long time.  Augustine, who my students read, opens his Confessions, his prayer, with the assertion that “our heart is unquiet until it rests in you.” He found his quiet heart in God, but wherever or whatever it is, you need to find it somewhere.  So. Kites.

There is reason to be hopeful.  These shooters are generally young men, it is true, but for most young people I meet this new world is not one to fear.  The issues that concern the white nationalist and the loony right they see as normal and worthy of defense.  You can read laments about the oppressive atmosphere on college campuses but I have seen nothing in my thirty years of college teaching that leads me to believe that these are anything other than crude caricatures written by frightened, old, white people.  And because so many parts of our current national government are dominated by frightened, old, white people, we need these young people to march, to hit the streets, to challenge the frightened old white people in primary elections.  The kids are all right.  We are going to need them to be.

2 thoughts on “This Is Not A Manifesto”