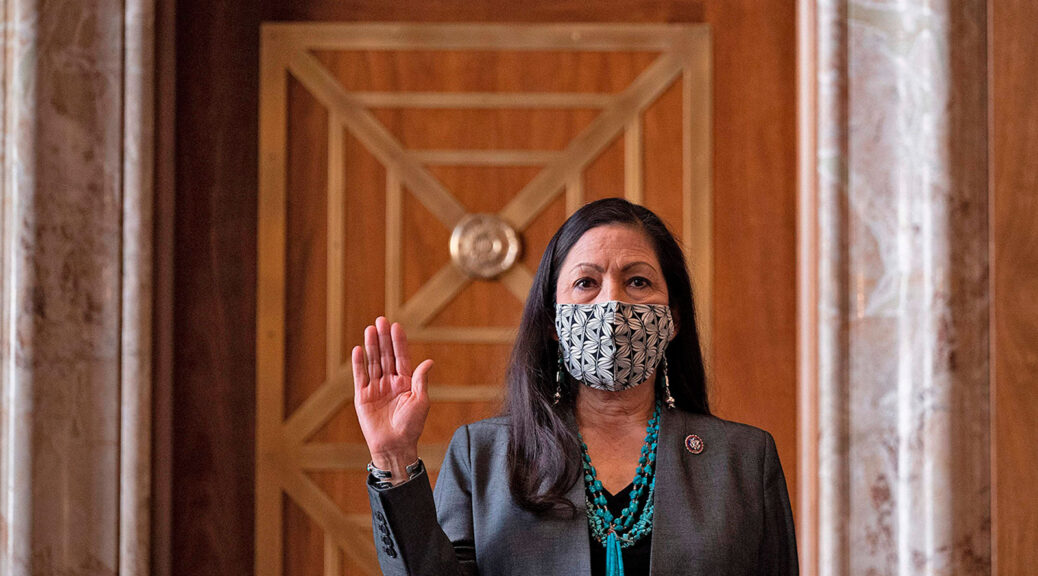 I co-wrote this piece with Joel Helfrich. It appeared on the History News Network site and, on March 24th, at Public Seminar.

In 1968 the National Indian Youth Council served as one of the organizers of the Native American contingent for the Poor People’s Campaign. This multi-racial coalition marched on Washington and, in a document penned by the “Committee of 100,” presented its list of demands. With regard to Indigenous Peoples in the United States, they insisted on “the right to have a decent life in our own communities,” with “guaranteed jobs, guaranteed income, housing, schools, economic development, but most important–we want them on our own terms.”

These young protestors singled out for particular condemnation the United States Department of Interior, founded by act of Congress in 1849. “The Interior Department,” the list of demands read, “began failing because it was built upon and operates under a racist, immoral, paternalistic, and colonialistic system.”  There was, they said, “no way to improve upon racism, immorality, and colonialism.”  They argued that “the system and power structure serving Indian peoples is a sickness which has grown to epidemic proportions. The Indian system is sick, paternalism is the virus, and the Secretary of the Interior is the carrier.”

These sentiments reflect a long-standing distrust and suspicion of the Interior Department on the part of Native peoples. Indeed, it was a little over a decade ago when Congress passed legislation settling the Cobell case with the three hundred thousand Native American plaintiffs who had demonstrated that the Interior Department had lost hundreds of millions of dollars owed to Indian trust beneficiaries. The Secretary of the Interior at the time admitted that serious mistakes had been made, and the trial court found “a century-long reign of mismanagement.”

President Biden nominated Deb Haaland, a congressional representative from New Mexico, to be the first Native American to become a Cabinet secretary and head the United States Department of Interior. Interior oversees more than 480 million acres of public lands, or nearly one-fifth of total land in the United States, mostly in the West, and 11 federal agencies, including the Bureau of Land Management, the National Parks Service, and the US Fish and Wildlife Service. Interior also includes the Bureau of Indian Affairs, Bureau of Indian Education, and Bureau of Trust Funds, having the greatest impact on Indigenous lives and Tribes of any Executive-branch agency.

Haaland certainly is well qualified for the job. She is a lawyer, an entrepreneur, and a forward-thinking innovator. She is a good steward of funds, and is familiar with many of Interior’s responsibilities, including for Indian Gaming, having served as chairwoman of the Laguna Development Corporation, New Mexico’s second largest tribal gaming business. And she is knowledgeable about the management of public lands, having served as co-chair of the US House Committee on Natural Resources.

Though in many ways conditions in reservation communities have improved since the Committee of 100 issued its demands in 1968, satiating America’s appetite for energy and mineral wealth always has come through exploiting lands important to Indigenous peoples. That has not changed. This was evident in 2016 at Standing Rock, and now at Oak Flat. It is a long history with which Haaland will have to contend.

Coming to the agency after Trump appointees who aggressively sought access to the mineral wealth of Indian Country, Haaland’s appointment marks a significant break. One could feel the ground shifting during her painful confirmation hearing, as Republican Senators closely tied to the Energy lobby tried to drag her down. They failed.

Secretary Haaland handled their inane and insulting questions with patience and kindness. She is viewed as a threat by those who wish to develop the mineral and energy resources of Indian Country. Her confirmation was a signal event for those who value the environment and appreciate the 172-year long historic relationship between Interior and America’s Native Nations.