When I teach Native American history, I frequently find myself describing the consequences of the policies and events we cover for children.  Boarding schools, for instance, but also the many times when children die—when children were killed.  I include these harrowing stories not to shock complacent students, but to try to get the kids in the class to understand more deeply the consequences of the policies, decisions, and events they have read about upon the most vulnerable people in a community, people with whom they are perhaps well-equipped to identify.

So I tell the students about George Percy. That weak and cowardly aristocrat who settled at Jamestown led a raid by an English party against the Paspahegh Indians, whose town stood a short distance upriver from that sickly fortified settlement.  Percy’s soldiers took the “Queen of Paspahegh” and her children hostage but his men began to grumble.  He gave in to them, threw the children overboard, and allowed his men to entertain themselves by “shooting out their brains in the water.”  I tell them of the Paxton Boys’ massacre of peaceful Conestoga Indians in December 1763.  The Paxton men killed fourteen of them: men, women, and a couple of children, no more than three years old.  The Paxton Boys split their skulls with tomahawks, and took their scalps as trophies.  This was intimate violence, acts committed at close range. To children.  To babies.  In order to help my students make sense of the Ghost Dance, I tell the students about the movement that occurred on the Kiowa-Comanche-Apache Reservation.  Among the Kiowa ghost dancers were a lot of parents, and they danced on the snowy ground hoping to see, once again, the children who had died, innocents slaughtered by measles, whooping cough, and pneumonia.  Grief lay at the broken heart of the Ghost Dance movement.  And of course that grief continues.  Harold Napoleon, in Yuuyaraq: The Way of the Human Being described Alaska Native communities immersed still in a grief caused by what he called “the Great Death.”

A short time ago I published a biography of Eleazer Williams, a Mohawk missionary to the Oneidas.  I spent a lot of time with Williams.  He struck me as a man with few principles, or as a liar, a hustler, or a confidence man. But Williams was also a man profoundly damaged by the death of his second child. 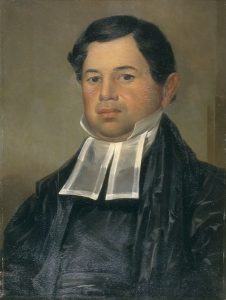 He wrote a letter to his wife in 1838.  She was a Metís woman, living still along the Fox River in Wisconsin.  At this point, Williams had been living apart from her for the better part of a decade.  He was always traveling—Buffalo, Oneida, Albany, New York, Washington, and only occasionally back to Green Bay.  This was the only letter of any length that he wrote to his wife that has survived, and in this one he began with small matters—of how the water and ice on the Fox River had done damage to the crops, he had heard.  He chastised her for not having planted the potatoes on higher ground. But he also urged her to think about matters religious.  Beware the shallow things.  Please, he wrote to his “Dear Mary,” “Nothing in this life would make me more happy than to find that you are serving God, and living in humility, as one who is devoted to Christ and preparing for Heaven.”  Focus on the important things. “Let no longer the world and its vanities be upon the upper most in your mind or thoughts—forsake them and give yourself to God and Jesus Christ who had redeemed you by his most precious blood.”

What, I wondered, was going on here?  He was writing, it seemed, to a woman who had lost her faith—in religion, in him, and, I suspect, a lot of things.  As I read the letter, it became clear to me why that might have been.  Williams had never lacked for words, but in this letter his desperation is palpable.  He would pray for her, he said. We must be a good example, he said, for the “only child we have.”  I knew that Williams and his wife had a son, who would have been a teenager. “How happy it would be, should we as a family, finally by the mercy of God, to meet all, with our departed beloved Anne, in Heaven, where, we shall all be happy without end and sing praises to God for all eternity.”

Who was Anne?  He had never mentioned her before.  This is the only time she appeared in Williams’s papers.  A dead child, presumably. It took a lot of digging. After some time in the archives, I found her.  She had died in 1830, eight years before this letter.  Hers was the first baptism recorded at Holy Apostles, the church Williams founded for relocated New York Indians in Wisconsin, and the first burial in the churchyard.  It was in 1830 that Williams largely left home.  Mary buried the child, who died when she was not quite eighteen months old, without his help.

This death haunted Williams. In the late 1840s he began to tell a story about an encounter he had with the French Prince de Joinville aboard a great lakes steamboat in 1841.  In this story, Williams told Joinville as they approached Green Bay that he and his wife had an infant daughter. Joinville offered to serve as godparent.  When they arrived at Green Bay, Williams learned that the baby had died several days earlier.  Joinville was sympathetic, but Williams never went home. He hung out with the French prince for a couple of days.  And here’s the thing:  This story—Joinville, the baby—it was all a lie.  It did not happen.  Williams was a liar.  That was easy to prove.  But why this lie, about this baby?

If you study early American history, you learn how frequent the death of children actually was.  Many families buried children, and I can imagine that the consequences were as emotionally devastating for many of them as it was for Eleazer Williams and his wife.  New England children studying their catechisms in the early nineteenth century were warned to consider that

I, in the burial place may see

Graves shorter far than I;

From Death’s arrest no age is free,

My God, may such an awful sight

Awakening be to me!

For death prepared be.”

The death of children was common.

As a historian, I find these stories sometimes difficult. I have never shared these thoughts with my friends and colleagues who teach history, but I imagine that they, too, can be overwhelmed by this history of grief, of people gone too soon. It’s heavy. My own children are all healthy.  Despite my own flaws, they are fine people, better than me in so many ways. I am fortunate.  But not everyone is.  In a chilling article that appeared in the October issue of The Atlantic, Roger Rosenblatt reflected upon the viciousness and inhumanity he had witnessed or learned about over his long career as a war reporter.  Rosenblatt told the story of Khu, a 15-year old boy who fled the war in Vietnam for Hong Kong.  His parents had died, and he had nothing.  They ran out of food on the ship he boarded.  The captain assigned one man to knock Khu out, and then slit his throat, so that the others on board could eat him.  Tears welled in the boy’s eyes, and they let him go, but they did kill another man and they ate him.  Khu, Roseblatt, and his translator looked out at the lights in Hong Kong Harbor.  Khu said that the lights and the boats were beautiful.  That is what he was thinking.  Rosenblatt asked him what else was beautiful. Khu said everything is beautiful. Sometimes even when it’s not.

I have thought of these stories today.  I read Jayson Greene’s searing essay in The New York Times, entitled “Children Don’t Always Live.”  Greene told the story of his daughter’s sudden, tragic death, his struggle with grief, and his continuing sadness even as he and his wife welcomed a new child, a boy who always will have a dead sister.   Speaking to his young son, Greene mustered “up every drop of bravery I can: ‘It is a beautiful world,’ I tell him, willing myself to believe it.  We are here to share it.”

I get that.  I try to persuade my students to be hopeful and, because they are young and bright and have not seen much yet, it is not a difficult sell.  Still, we cannot teach about the past without considering the pain, the grief, and the sadness that people—native and non-native alike—felt.  If we want to reach our students, we need to help them feel the weight of the past, to experience those moments of brutality, violence and sadness, and those occasional moments of courage, humanity and grace. Connection, right?  Reaching across the span of time, across the vast distances, in an attempt to come close to understanding the world as others experienced it.