I posted about the Senate Indian Affairs Committee meeting on human trafficking in Indian Country last week.  The upshot of the hearings was disappointing.  All acknowledge a problem exists but there is little data on its scope.  At the hearings, the Justice Department seemed uninterested to committing the resources necessary to gather that data.  Anyone who studies Native American history closely will note, however, that the Justice Department has never prioritized crime committed in Indian Country. Though the Obama Administration’s revision of the Violence Against Women Act was significant, the reform went only so far.  Fortunately, more attention is being drawn to this problem.

Some important work is being done and some media are beginning to take notice.   The National Collaborating Center for Aboriginal Health in Canada has published a report, Indigenous Communities and Family Violence: Changing the Conversation, that presents domestic violence in Indian reserves as one more of the bitter fruits of an enduring colonialism.   They offer a powerful list of recommendations calling upon provincial and national officials to recognize indigenous perspectives, the continuing process of colonialism and dispossession, and the many values that inhere in native cultures to remedy the problem of violence on Indian reserves. It is a powerful report, and worth reading.

To get a sense of the problems that occur, both from within indigenous families and from the outside, it is worth looking at the recent report from Red Power Media. While Americans are reeling from yet another explosion of gun violence, and the disaster that has struck Puerto Rico made worse by the nation’s disaster of a president, an indigenous community in British Columbia is worried.   In response to the growth of “man camps,” so-called,  a British Columbia indigenous community tribe is  stocking up on rape kits in anticipation of the expected wholesale assault on Native American women.

“Nak’azdli Whut’en First Nation is nestled on the banks of Stuart Lake in north-central British Columbia, surrounded by rolling foothills and tall trees.

It is a relatively remote community, breathtaking in scenery and dependent on economic opportunities in forestry, mining, and pipeline development. It is a community bracing for major change.

Over the next decade, as many as 6,000 new energy industry workers could descend upon the region. The prospect of such a big influx of workers living in nearby “man camps” has aroused fears of increased violence and drug use.

The influx could more than double the population of about 4,500 in the Fort St. James area, which includes the municipality, rural communities and First Nations. Nak’azdli has just 1,972 members living both on and off reserves. The nearest city, Prince George, is 160 kilometres away.”

The threat is significant.  The Lake Babine First Nation and the Nak’azdli Whut’en commissioned a study, funded by the British Columbia provincial government.  The evidence they found demonstrated

that industrial camps are associated with increased rates of sexual assault and violence against Indigenous women, along with addiction, sexually transmitted infections, and family violence.

“The potential for sexual assault, violence, disappearances, (sexually transmitted diseases), increases with the 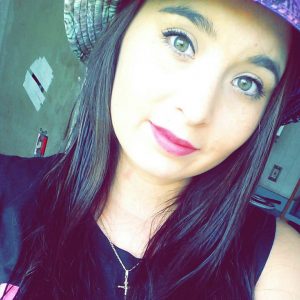 number of trucks on the road,” study author Ginger Gibson told National Observer. “There’s a whole whack of issues that don’t get considered until construction is happening and that’s too late.”

Meanwhile, in North Dakota, after the murder of pregnant Savanna La Fontaine Greywind, (that’s her in the picture to the right) her family hired attorney Gloria Allred to represent them in a search for answers.  LaFontaine-Greywind’s murder–her body was found in the Red River, her newborn baby in the hands of one of the suspects-along with the hiring of Allred created enough pressure at last to get officials in North Dakota to expand their investigation.  North Dakota’s state senate has finally decided to look into the “epidemic” of missing and murdered indigenous women.

Under pressure, the Justice Department has announced grants programs to investigate the problem of missing and murdered indigenous women, as well as violence against women and children in Indian Country.  $130 million has been directed to addressing these challenges.  According to Assistant Attorney General Rachel Brand, “these awards stand as a clear expression of our support for Native American women and tribal self-determination and reflect the vital role we believe American Indian tribes and Alaska Native villages play in ensuring the safety of all our citizens.”

Another way to get at the scope of this enormous problem, is to follow it on social media, using the hashtags #IdleNoMore and #MMIW.  A Facebook page exists to help in locating and, in some instances, identifying missing and murdered indigenous women.   If you know of additional resources, please forward them to me and I will be sure to distribute them as widely as I can.