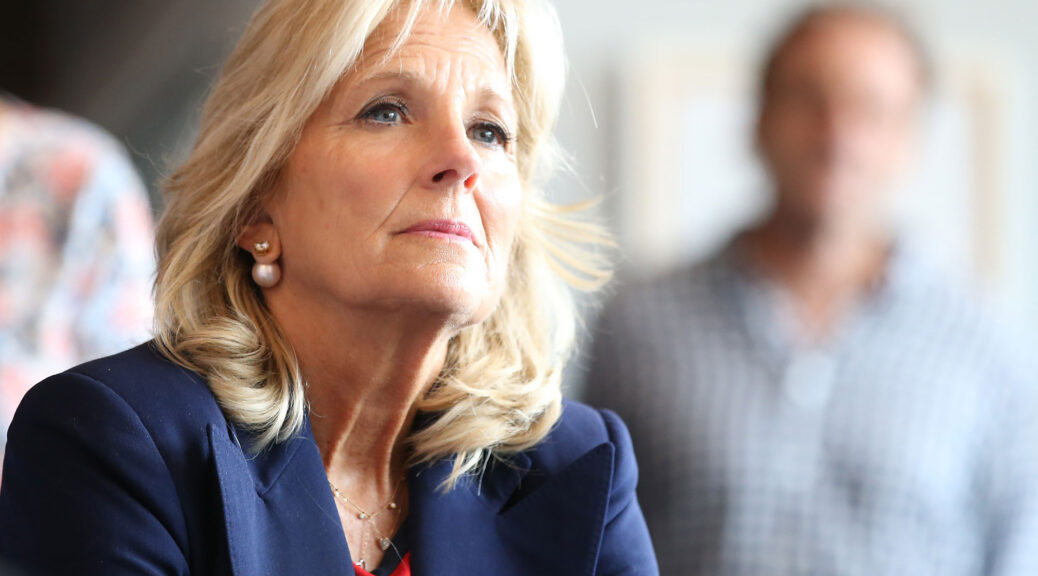 Or unmotivated, or an under-achiever, or “not interested in school.” I was all those things. I am pretty certain I did not know what the SAT was until I became a college professor and that I did not understand its gate-keeping and corporate-enriching function until I became the parent of a high school student. I certainly never took it. I did not even realize until later that I barely graduated from high school. Some of my family insisted I go to my high school graduation because they expected it would be my last.

You can call me Doctor.

And here’s the thing: I was precisely the sort of student who Dr. Jill Biden would have helped. People like Dr. Jill Biden motivated me to make my way through school, to find my calling, to succeed. And I needed that. I needed it when at Ventura College. At Cal State. Even at Syracuse, where I earned my Ph. D. It was not a solo effort. I needed a lot of help.

Because it turns out that when you do not do well in high school, don’t take the SAT, and don’t build relationships with the people who might write for you letters of recommendation, lots of doors close. You will have to work harder than your peers who were either more privileged or more adept at making important life decisions while teenagers. And sometimes you can with remarkable ease dig yourself a hole from which it is very difficult to escape.

One door that remained open for me was the junior college less than a mile from my folks’ house. I am pretty sure the school took anyone who applied, and I could walk there. It was cheaper than the four year college. I could have learned a trade there, had I wished. I could knock off some of the required courses needed should I choose to transfer to the Cal State system. Most importantly, I could learn what it meant to be student, to take learning seriously, and how to succeed. That did not happen by itself. It was because of the people I encountered at that school

I can name more of the teachers from whom I took courses at Ventura College than I can for my undergraduate years at Cal State Long Beach, where I ultimately transferred. I can remember more distinct moments in the classroom from VC than I can from CSULB. None of the teachers I had at the junior college had Ph.D. degrees. None of them had the Ed.D degree that so many of Dr. Biden’s creepy and sexist critics have maligned. As far as I can tell, they all had Master’s degrees and none of them every wrote a book or published any path-breaking research. And while I was there as a student? I can guarantee you that I never thought for one second, “I wonder what degree my teacher has and from where they got it.” Never dawned on me at that time that this was something that mattered.

Those teachers, by helping me learn how to think, and teaching me that learning was, among many things a discipline, changed my life.

In my reasonably affluent neighborhood, I see so many cars with college stickers on the back window. Parents take pride in their kids attending Yale, Duke, Northwestern, or Cornell. I often see stickers for my own college, which for years has been thought of as something akin to the poor man’s Swarthmore. I do not see stickers for the “less prestigious'” universities and for community colleges. That is unfortunate.

One quick glance at the leadership of the Republican Party, for instance, will teach you that legions of idiots and jackasses have flourished in and graduated from Ivy League colleges. While some will tell you that the United States has the best system of higher education in the world, it would be foolish to deny that it is expensive, elitist, and frequently out of reach for too many people. The cost of college continues to sky rocket. Even at the public schools I attended as an undergraduate and beginning graduate student, dwindling state support for higher education has caused the cost of attendance to soar.

My first teaching job was at Montana State University-Billings. When I was there in the mid-1990s, the average age of the students was slightly above 27 years. I was teaching my peers. The school served many “non-traditional” students who in Montana and many parts of the country are hardly non-traditional at all. My students commuted from the Crow Reservation, or they were coming back to school after raising a family or a divorce or after a business failure or an at-work injury. Some had done their time in the armed forces and were looking for what came next. Some had careened from one misfortune to another but finally seemed ready to make a move. Some had not cared about school but now, finally, had decided to go. I miss teaching older students.

Many of these students, according to the logic upon which we still too often rely, were not “well-prepared” for college. They had “deficiencies” that needed “remediation” and sometimes support services. Many of these students flunked courses, or they came for a semester before taking the next semester off. Almost none of them graduated in four years. I am embarrassed to say that, starting out, fresh out of Syracuse, I sometimes lamented that these students did not seem to have any background knowledge. I was wrong to think that way. You see in higher education we too often blame the victims: we are college professors, after all, and we have no obligation to teach those who cannot be taught. If the student, for whatever reason, does not have the skills to succeed in college, they are out of luck. Some college students just are not good enough and they will flunk out. It is almost seen as inevitable. My wife and her friends, inner-city elementary school teachers all, laugh at what they see as our snobbishness. If only we had the option of choosing our students, they say, and viewing the difficult ones as unfortunate and expendable. They have to teach everyone who walks or crawls in the door.

The attacks on Dr. Biden are so distasteful. They are sexist and elitist, of course. They are the sort of thing the dude who Elle dumped in “Legally Blonde” would say. But more than that, in their sneering contempt for public higher education and, most of all, community colleges, they cast the teachers who teach there and the students who study there as unworthy, as people whose educations count for less than theirs. No empathy. No sense that different people follow different paths, and that not everyone has it so easy. If only they could spend some time on these campuses. If they were honest they would see that the work of thousands of educators like Dr. Biden is so much more valuable and important than their stupid, key-jangling opinion pieces.