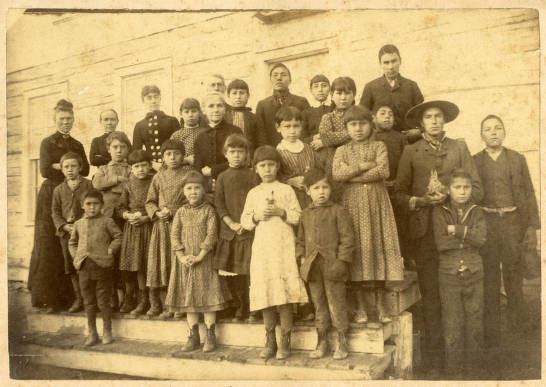 And, like many things one looks forward to from Democratic administrations, it’s a bit of a letdown. If you are a historian who has worked with these sources, and if you have even a passing familiarity with the published scholarship on American Indian Boarding schools, you are unlikely to be surprised by anything that appears in the report’s 100-plus pages. It is a brief document, no more than an a cursory introduction into a vast, complex and important subject. But it’s a start.

Produced by Assistant Secretary–Indian Affairs Bryan Newland, the bulk of the report is an institutional overview of American Indian boarding schools and the government policies and programs that implemented, supported, and funded these institutions. The report is divided into nineteen very-brief chapters. The penultimate one includes the “Federal Indian Boarding School Initiative Findings and Conclusions.”

Based on that list of conclusions, Secretary Newland recommended that research continue through the “approximately 98.4 million sheets of paper” housed in boxes at the National Archives and other federal agencies. It is an enormous undertaking. The following questions, he suggested, would guide the research:

The shadow of recent discoveries of unmarked graves in Canada hangs over Newland’s report. He wants to produce a second, much larger report, that determines the locations for all unmarked and marked burial sites connected to federal boarding schools, identify the children buried in these sites, and approximates “a full accounting of Federal support for the Federal Indian boarding school system.”

In addition, Newland recommends that the government undertake efforts to identify living survivors of the boarding schools, document the students’ experiences, “support protection, preservation, reclamation, and co-management of sites across the Federal Indian boarding school system where the Federal Government has jurisdiction over a location.” Newlands wants to see a systematic effort to collect documents and house them at the Department of Interior Library “to preserve centralized Federal expertise on the Federal Indian boarding school system.” Interior should solicit help from other federal agencies which have information on boarding schools, and support non-federal entities that house information as well. Newland recommends congressional action as well: to support or strengthen NAGPRA to prevent sensitive and specific tribal information that may be uncovered as a result of the investigation; to advance legislation encouraging Indigenous language revitalization; to promote public health research on the consequences of the boarding school system; and finally to erect a federal memorial to the children who experienced the federal boarding school system.

There are some laudable goals here. Indian Boarding Schools were institutions that affected many thousands and thousands of Native American people over many generations, over many decades. The subject is vast, the documentary record so enormous as to make a complete accounting of the sort envisioned by Newland in his recommendations a mammoth, generational task. I would encourage this effort. We all should encourage this effort. This report is nothing but a start.

But I would encourage the investigators to remember that there is no more uninteresting and unimportant way to write about educational institutions than to focus on bureaucrats and leaders, policies, proposals and laws. What we need is a history of the students, with proper protections in place to guard privacy. The evidence suggests that the physical and emotional consequences of attending boarding school could be substantial and the damage could be transmitted across the generations.

This is a more difficult story to tell than to write about a “system.” It takes so much more work. It is exhausting to be exhaustive. Doing this work well, I know, can take a toll on the researchers. But we must keep in mind that the federal boarding school system was a haphazard and large network of loosely connected and poorly supervised institutions that acted with little effective federal oversight. The institutions that were part of this system began with a commitment to assimilation and erasure, to incorporating Indigenous young people into the American body politic by eliminating their Indigenous culture, language and religion. One can write a history of schools. One can write about curricula, educators, and federal policy makers. What we need, however, is a history of the Boarding schools from the bottom-up. We must never forget that this is a history that involves thousands of young people placed in an educational system that claimed as its goal cultural genocide.

I have tried to write some of these stories on this blog: I wrote about the lonely death of Carlos Pico, a Mission Indian from California. I have written about some Onondaga and Oneida Carlisle alums who traveled to Europe in 1914 as part of a circus, performing in a variant of a “Wild West” type show before the first World War broke out. Reflecting on Arlette Farge’s wonderful essay, The Allure of the Archives, I wrote about the challenge of reconstructing the lives of ordinary Onondagas who attended Carlisle and other boarding schools. And late last year I wrote a series of posts following all the Carlisle students who passed through one “outing” placement for Native American girls. The first of those posts is right here.

Schools are people. They are teachers (and for those who worked in Boarding Schools we need to learn more) and students.

I have found through my own work that descendants of boarding school students do not often know the entirety of their ancestors’ experience. I have had the opportunity to share with families the stories of their grandparents’ time at Carlisle, for instance, or lesser-studied schools like the Lincoln Institution in Philadelphia. Ten thousand students attended Carlisle, and that is only one of many schools. We need to know about the history of these institutions, but more than that, we need to recover the stories of the young people who attended them. What I am willing to bet is that the results of so enormous a historical undertaking and accounting will show that Indigenous peoples were so much more powerful, as individuals and as members of native nations, than the forces the federal government aimed at their destruction.