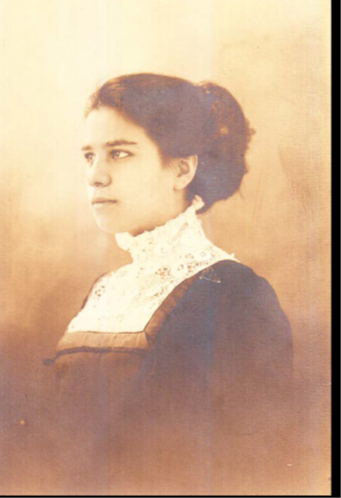 Both students’ files are pretty thin.  Annie arrived at Carlisle from the Mohawk Akwesasne reservation in September of 1906 and stayed until June of 1911 when she graduated.  She seems to have returned for one more year of training in nursing later that year, as a twenty-year old.  We know little about her home life, though her file does contain her Mohawk name, rendered phonetically by one of the school’s clerks as “ha-nau-ka-rou-to-ra-ta.”  Likewise, we know little of her life after she left Carlisle.  She may have been the same “Annie Diabo” who, in 1947, received word that her son, a World War II veteran and a high steel worker in California’s Bay Area, was struck by a car while he crossed Highway 1 after a night of drinking.  Diabo is a common Mohawk name, and Mohawks are known for their work in high steel.

Susie Porter came to Carlisle from the White Earth Reservation in Minnesota.  She was 17 years old when she arrived in 1907.  She married shortly after her return home in 1912.  She was described during her stay at Mrs. Jacobs’ place as “a good trust-worthy girl, neat about her work, a good waitress, very satisfactory.”

One way to get at the experiences of these young women while they were at Carlisle is to search for their names in the school newspaper, The Arrow.  Both girls were active in the Mercers and both were members of the YWCA.  Annie gave a number of “Recitations,” on various subjects, while Susie seems to have loved to debate.  She took the affirmative position in a debate on the proposition “that iron is more beneficial to man than gold” and the negative position on the proposition “that foreign immigration to the United States should be restricted.” Susie was a far more visible student than Annie.  In the art room, Susie made “the most handsome blanket,” following a Pueblo design.  “The soft colors, so carefully blended, for a color plan that is both pleasant and restful to the eye.” I wish I could see what it looked like.

There is a story in The Arrow that gives us our only glimpse into the life of the girls who stayed at Mrs. Jacobs’ place in Ocean City.  It is easy to imagine that Nora Printup loved it there. Her life could not have been that different from Susie and Annie, who arrived four years after her death. Katherine Wolf, a Cherokee, was placed for her outing at a home in Ocean City not far from Mrs. Jacobs.  Katherine found Susie and Annie, and the girls became friends.  Susie, Annie and Katherine “went bathing almost every afternoon” and, “in the evening,” Katherine wrote, “we generally took a walk along the beach.”

Annie kept in touch with Carlisle after she left, but it is impossible to tell how much and to what extent.  Susie left Carlisle, first for Wisconsin to keep house for her father, and then to Minnesota.  She married, and continued to write to the school.  She returned for graduation in 1912, and she sent letters asking for sheet music from the Carlisle song book that she wished to play at church.  She was a devoted Christian, and a devoted Carlisle alum.