I have not posted to this blog as much as I have in the past. I am on sabbatical, working on a history of the Onondaga Nation that I began long ago. I won’t finish it during the semester I have off–it is just too big a project–but I hope to make some substantial progress.

I have been working my way through the Jesuit Relations, the annual writings of the French priests who began ministering to the Haudenosaunee in the middle of the seventeenth century. The first Jesuits arrived at Onondaga, at the very center of the Iroquois League, in 1654. They remained even after many of the converts left for mission settlements in the St. Lawrence Valley. After most of the devoted left, Father Jean de Lamberville found himself facing the Onondagas’ “ill humor and savage whims,” as well as their outright rejection. “The chief fruit that I have gathered,” he wrote, “has been among the dying.” Mostly, he baptized dying children. “This is the most certain fruit we gather in this country,” he wrote, “where it is desirable that the children should die before obtaining the use of their reason.” It is a constant theme in Lamberville’s writings. “The Church of Onnontague,” he wrote, “has been blessedly diminished this year by the death of some Christians who have gone to increase the number of the blessed.” Because of his medical skills, Lamberville often was granted access to the sick. Few of these “escape who are not baptized before they die.”

Lamberville baptized thirty-nine Onondagas in 1671, “twenty of them entering, soon after, into the possession of glory.” Of the twenty-seven people he baptized in 1672, “They all died, with the exception of three.” In 1673, he baptized eight “aged persons,” all but one of whom died. In a letter to his superiors written in June 1676, Lamberville reported that he recently had baptized forty-five children, “forty of whom are before God.” He admired, he wrote, the ways God adopted “for the salvation of his elect,” as he presided over a church composed of dead children.

We are facing a national crisis in history education, as Republican lawmakers across the country rush to downplay the Holocaust, erase slavery, deny the diversity of this country’s many stories, and proscribe the teaching of ideas they find suspect. History can be difficult work at times, carried on in defiance of those frightened men and women who worry that a frank discussion of our nation’s sins may not lead to forgiveness. And at times, writing history can be emotionally exhausting. 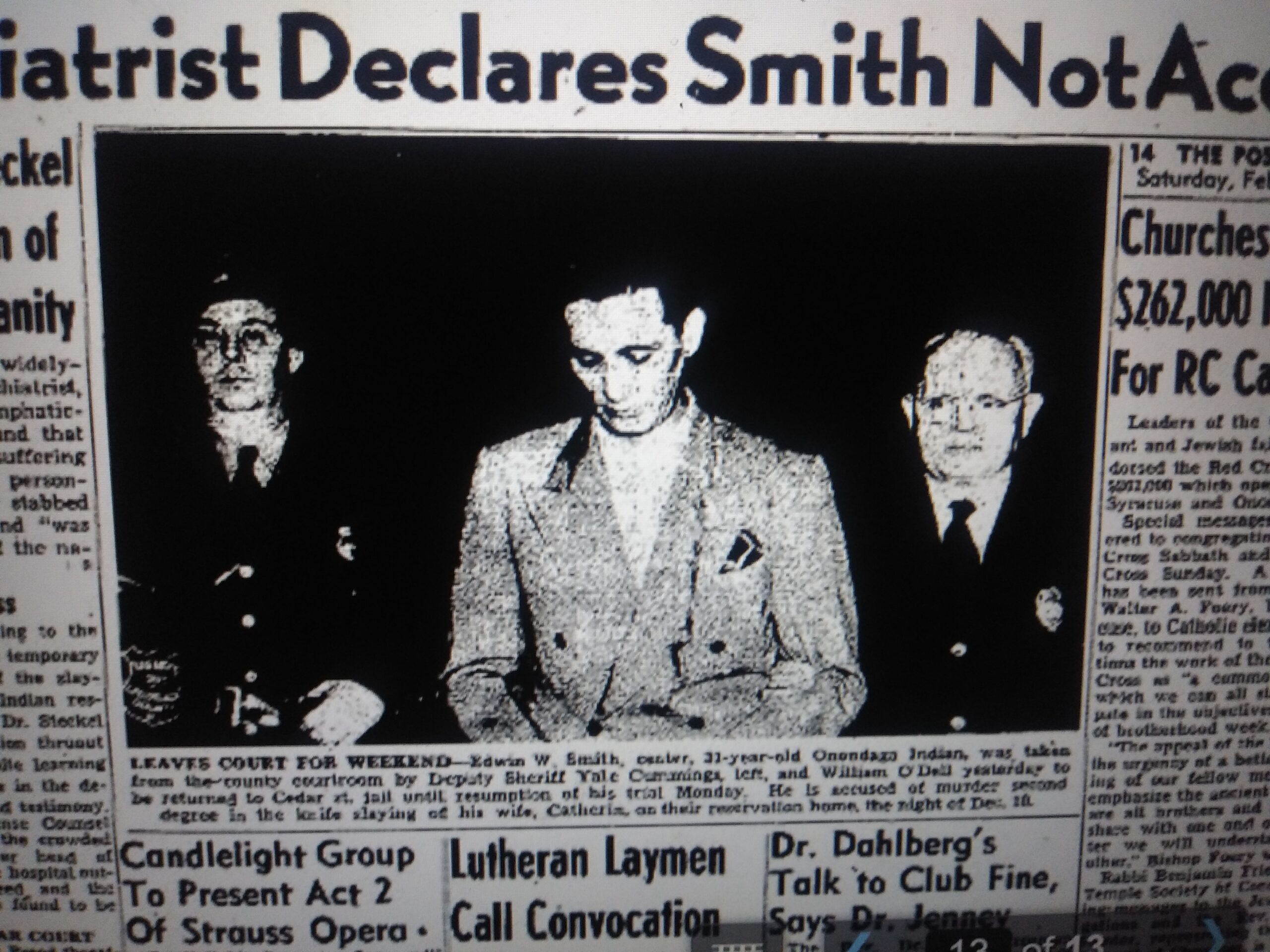 The newspaper coverage may as well have said that Mrs. Smith had it coming.

Have you ever been stopped in your tracks by something that you read? Those of you who do historical research, I will wager, can answer this question easily in the affirmative. It happened to me again early last week. And like a deep scratch, I am feeling it days later.

I had been listening to as set of audio recordings housed at the American Philosophical Society in Philadelphia. An Onondaga woman named Lucenda George sat down with the anthropologist Fred Lukoff in 1950 and told him about life on the Nation Territory, just a bit south of Syracuse, New York. Mrs. George spoke her native language but in several dozen of the recordings, she translated what she said into English, line by line, as Lukoff advanced the tape in small segments.

Mrs. George told stories about Onondaga clothing and food.  She told Lukoff about working in factories in Syracuse during the first World War.  She told him about a band of gypsies camped on the reservation, and about how she drove a taxi for a time in Syracuse. There was one about the young white woman who boarded with her who wanted to become a missionary.  She spoke about locusts, an occasional delicacy the Onondagas fried in a pan with butter and salt. Don’t criticize, Mrs. George suggested, if you’ve ever eaten and enjoyed a lobster.

One of the stories was “About a Murder.” Mrs. George told the tale of an Onondaga man who had murdered his Onondaga wife.  “It must be about two years ago that happened,” she said. “This man killed his wife with a knife. He kept pushing the knife in her throat until she died.”  He was tried, and then he was acquitted.  Then, according to Mrs. George, he left the Nation Territory, abandoned his three children, “and nobody knows where he is now.”

This story surprised me.  I had spent a great deal of time reading through every newspaper story I could find about the Onondagas in the Syracuse newspapers and in other newspapers that covered central New York.  I had not seen this. Perhaps I missed it.  I went back to the papers, and I looked.  It took me only a few minutes. On December 10, 1948, Edwin Smith murdered his Onondaga wife.

One source, a seventy-year old digitized copy of a reel-to-reel tape of a story told by Lucenda George, clicks into place with the newspaper coverage of a brutal crime. A fuller picture comes into view.

Edwin Smith had been struggling, that’s for sure.  According to coverage in the Syracuse Post-Standard, several hours before Smith murdered his wife, he entered the grocery store in Nedrow, just off the Nation Territory, owned and operated by Justice of the Peace Darwin N. Camp.  Smith had left the Onondaga County Penitentiary on the first of December after having served a sixty-day term for assault.  Now, he told Camp, “I am in trouble again.”

That evening Smith took his wife to a dance.  According to Mrs. George, people were drinking. Smith and his wife were drinking, too.  “She got up on the table,” Mrs. George said, and “took all her clothes off, and there she stood without a stitch of clothing on her.” She started dancing. Mr. Smith was so embarrassed that he left, but there was a man outside who told him to go back inside, get his wife, and take her home. So he did. He told her to get dressed, and he took her home. He continued to drink when they got there.  Then he stabbed her twenty-one times, the lethal blow severing her jugular vein.  He called the police, told them he had killed his wife. His three children, ages 8, 6, and 4, were sleeping in the other room.  He killed their mother “because he couldn’t stand it any longer,” Mrs. George said. “Everything just went black.”

The newspapers reported on Mrs. Smith’s infidelity.  Mrs. George said that “when they first married she was a very good girl,” but after a while “she got mixed up with this bad company.”  Smith’s defense attorney presented a case of temporary insanity. A psychologist testified that Smith suffered from a “disassociated personality” when he stabbed his wife to death, and that as a result, he “was not able to understand the nature of his act.”  Testifying to Smith’s “peaceful and quiet nature” was the Thadodaho of the Six Nations George Thomas, along with Onondaga Nation treasurer Davis Greene, Chief Jesse Lyons, Elizabeth Powless, and the Methodist minister Livingston Crouse. They all accepted the argument that Mrs. Smith’s infidelity had produced in Mr. Smith so much pain and anguish that he could not justly be held responsible for his actions.  It took the jury of nine men and three women less than four hours to reach its verdict at the beginning of March in 1949.  Not guilty.  “At the trial,” Mrs. George said, “the sentiment was all for him because of his wife’s terrible deed. I am speaking of the white people now. They were for him.” The jury accepted that a wife’s infidelity could drive a husband so crazy that he could get away with murder.

Mrs. George said that Mr. Smith left the Nation after his acquittal. “This man who has gone away nobody knows where he is, whether he is alive or dead, [and] he has never written to ask if everybody is all right here.” It turns out that he went to Syracuse.  His three children were raised in foster care. They went through a lot.  A friend on the Nation Territory who knows its history well told me that the youngest child “grew up damaged” and has passed away.

You likely have noticed what is missing from this account.  What about Mrs. Smith? Catherine? With all the support shown to Edwin, it is easy to lose track of her. Smith’s defense attorney argued that Mrs. Smith’s infidelity drove him temporarily insane. The chiefs and a Christian minister, in telling the jury that Edwin was a good guy, endorsed this view, even if the record clearly demonstrates his use of violence as a solution to his problems. The jury accepted as perfectly reasonable the argument that a wife’s infidelity can drive a man so insane that he might stab her twenty-one times. Everyone seemed to think that Mrs. Smith had it coming. Was she beaten, neglected, ignored, and tortured in her marriage? Her motives are completely absent, and that is heartbreaking.

And that is what I carry with me as I think about a murder that took place on an Indian reservation seventy-two years ago. The children—I find it hard to believe that all three of them slept through the slaughter—in one vicious night lost both of their parents.  I can only imagine their pain, confusion, and anger. And that of Mrs. Smith–Catherine–as she attempted to fight off her killer.  People on the Onondaga Nation said “they could hear her scream all the way down the road.”