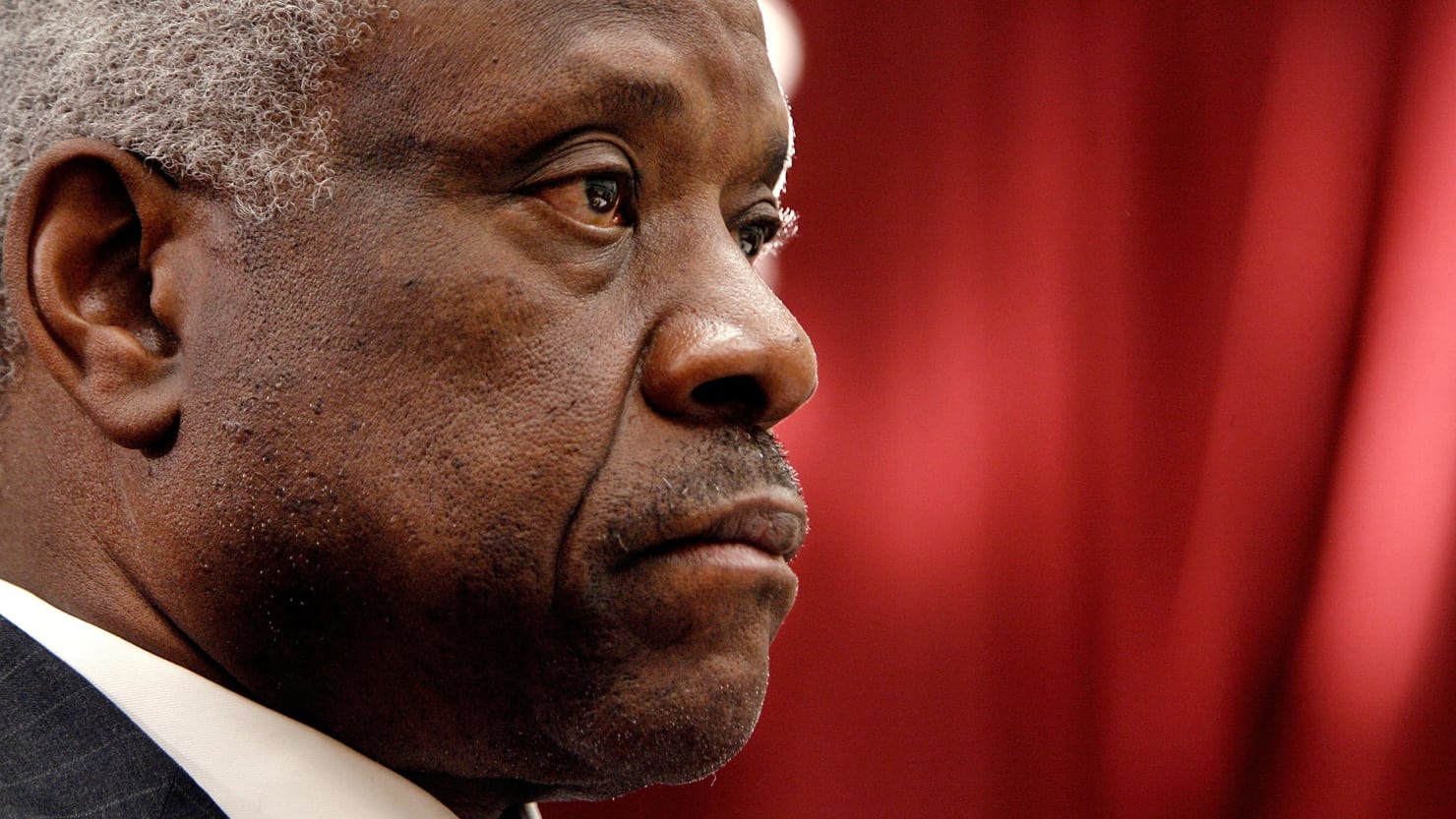 I tell my students to give Justice Clarence Thomas a chance. It is a difficult thing to do, because to me so many of his views are so loathsome. For my students, it is a bit different.  If they have heard anything about him at all, it’s that Justice Thomas is the quiet one, and not in the George Harrison sort of way, but in the “I got nothing to say” sort of way.  They know he is one of the most conservative justices on the Court. Though their knowledge about him is vague and imprecise, I have seen students roll their eyes when I mention his name.

“You don’t get to do that,” I tell my students.  We are historians, scholars, practitioners of an academic discipline.  We do not get to call names or roll our eyes.  Just as I am bothered by those on the right who dismiss the sort of work I do as “politically correct,” and who illegitimately avoid arguments that make them uncomfortable, we must not reject an argument because we have heard things about the person making the argument. We must take seriously the ideas and beliefs of those with whom, politically or ideologically, we might be predisposed to disagree, even when it is difficult to do so.  We consider their arguments.  Then we respond.

And Justice Thomas has said some interesting things about the Supreme Court’s long and tangled history with native nations.  One need not accept everything he says to recognize that Justice Thomas has raised some troubling and provocative questions.

For example, there is his concurring opinion in the 2004 case of US v. Lara. The Lara case, which I have students in my Indian law class read, tested the constitutionality of congressional legislation that offered a remedy–the so-called “Duro Fix–for problems raised in an earlier case called Duro v. Reina (1990).

In 1978, in the Oliphant decision, the Court had held that Indian tribes lacked the ability to prosecute non-Indians who committed crimes on tribal land, because the exercise of this power was somehow inconsistent with their status as “domestic dependent nations.” (The Court never clearly explained why).  Duro extended that prohibition to non-member Indians, who in the Court’s view stood in relation to tribal governments in exactly the same position as a non-Indian.  Both decisions delivered significant blows to a native nation’s ability to preserve law and order on its own lands.

Recognizing that Duro created a significant problem, Congress reacted and gave tribes the power to prosecute non-member Indians, and in Lara Justice Thomas concurred in an opinion recognizing the constitutionality of the legislation.  Still, Thomas was troubled by the “premises and logic of our tribal sovereignty cases.”

Thomas felt that the court had not attempted to remove the important tensions between two assumptions that struck him as contradictory.  “First, Congress (rather than some other part of the Federal Government) can regulate virtually every aspect of the tribes without rendering tribal sovereignty a nullity.” It did so, however, at the same time that it maintained that “the Indian tribes retain inherent sovereignty to enforce their criminal laws against their own members.”

Thomas could not accept the Court’s assertion “that the Constitution grants Congress plenary power to calibrate the ‘metes and bounds of tribal sovereignty.'” He had read the Constitution, of course, and in it, he wrote, “I cannot locate such congressional authority in the Treaty Clause. . . or the Indian Commerce Clause,” which gave to Congress in Article I, Section 8, the right to regulate “commerce” with the Indian tribes.

Furthermore, Thomas questioned the constitutionality of the 1871 enactment through which Congress put an end to treaty-making, because “the making of treaties, after all, is the one mechanism that the Constitution clearly provides for the Federal Government to interact with sovereigns other than the States.”

Thomas reviewed the Lara reasoning, and that used by the Court in its antecedents: Oiliphant, US v. Wheeler (1978), and Duro.  He was skeptical.  In his conclusion, Thomas wrote,

The Court should admit that it has failed in its quest to find a source of congressional power to adjust tribal sovereignty. Such an acknowledgment might allow the Court to argue the logically antecedent question whether Congress (as opposed to the President) has that power.  A cogent answer would serve as the foundation for the analysis of sovereignty issues posed by this case. We might find that the Federal Government cannot regulate the tribes through ordinary domestic legislation and simultaneously maintain that the tribes are sovereigns in any meaningful sense.

In Adoptive Couple v. Baby Girl (2013), Thomas again considered the constitutional basis for plenary power, this time in a case involving the 1978 Indian Child Welfare Act.  “Although the Court has said,” he wrote, “that the central function of the Indian Commerce Clause is to provide Congress with plenary power to legislate in the field of Indian affairs,” neither the text nor the original understandings of the Clause “supports Congress’ claim to ‘plenary’ power.”  The contested adoption proceedings at the heart of the Baby Girl case involved neither commerce nor tribes, and Thomas believed that “there is simply no basis for Congress’ assertion of authority over such proceedings.”

Three years later, in the case of US v. Bryant, Thomas once again returned to these questions. Congress’s “purported plenary power over Indian tribes,” he wrote, rests on shaky foundations.  “No enumerated power–not Congress’ power to ‘regulate commerce…with Indian tribes,’ not the Senate’s role in approving treaties, nor anything else, gives Congress such sweeping authority.”  Thomas found the origins of this claim to power in the 1886 Kagama decision, which upheld the constitutionality of the previous year’s Major Crimes Act.  Native American weakness, in that case, justified the extension of federal power.  The government’s power, the Kagama court wrote, “over these remnants of a race once powerful, now weak and diminished in numbers, is necessary to their protection… It must exist in that government, because it has never existed anywhere else.” That seemed like a claim to power that was not supported by the Constitution and it was time, in Thomas’s view, to review these decisions.

And in an 2017 dissent in a case involving the Secretary of the Interior’s decision to take 13,000 acres of Oneida land in New York into trust, Thomas again criticized the Court’s Indian Commerce Clause rulings.  Allowing the federal government to take land within a state into trust on behalf of an Indian tribe, Thomas argued, could not be supported by any language in the Constitution, and it would have shocked the “Founding Fathers” to “find such a power lurking in a clause they understood to give Congress the limited authority to ‘regulate trade with Indian tribes living beyond state boundaries.”

If Congress had no legitimate constitutional authority to legislate for Indians (in this case, the legislation in question was the 1934 Indian Reorganization Act), and no acceptable justification for its claim to plenary power, Thomas believed that power must exist in some other entity.  For Thomas, it seemed to be with the states, a power reserved to them by the Constitution.   And that logic, if acted upon, would be toxic and destructive.  Leaving Indian tribes at the mercy of state governments would eliminate the nation-to-nation relationship between the United States and native nations, and produce a full negation of American Indian tribal sovereignty. One could write a history of Indians in the United States focusing on the attempt of state governments to extend their authority into Indian country.

There is a lot of legal scholarship out there on the Supreme Court’s rulings on the scope or limits of the Indian Commerce Clause, and I have by no means read it all.  Matthew L. M. Fletcher and Gregory Ablavsky have both written recently about the Indian Commerce clause, and they both flatly reject Thomas’s conclusions.  They believe that his interpretation of the Indian Commerce Clause is too narrow, too literal, and that Congress did have the power to enact protective pieces of legislation like the Indian Reorganization Act, or the Indian Child Welfare Act, or to take Indian lands within a state into trust.  There is a long thread of decisions they argue, where Congress protected Native nations from the encroaching power of the several states.  They have a point, I suppose.

I have only sampled some this scholarship, and I have a lot more to read.  But I am not sure Ablavsky, for instance, is absolutely right.  And what if Thomas is right?  At least in part?  A little bit?

In other words, what if the Constitution does not give Congress plenary power over Indian affairs?  Article I, Section 8 of the Constitution says that “Congress shall have the power to regulate Commerce with foreign nations and among the several states, and with the Indian tribes.”  Ablavsky notes that the Founding Fathers used the word “intercourse” far more often than they did the word “commerce,” and that this word has a wider range of meanings.  There is a lot of truth to that.  The first federal Congress, in order to flesh out the sparse language of the Constitution, enacted in the summer of 1790 the first of a series of “Indian Trade and Intercourse Acts.”  But look at the legislation.  The Indian Trade and Intercourse Act regulated those instances where native peoples and newcomers came into contact by limiting the actions of non-Indians: Americans could not trade with Indians without a license, for instance, and purchases of Indian land could be effected only by the national government.  In the Indian Trade and Intercourse Act, Congress asserted no power to regulate the internal affairs of any native nation.

Maybe plenary power is a lie, a fiction, or a fraud.  Maybe Thomas is right, in that the Court, over many years, has just sort of made stuff up to suit its purposes.

I have many friends who spend a great deal of time decrying the so-called “Doctrine of Discovery,” the notion that somehow the Europeans’ discovery of America gave them title to land on this continent.  Many of them are calling for a repeal of the doctrine, and for its repudiation by the churches who originally espoused it.   Is the notion of “plenary power” any less a fiction?  Can it be justified in any way from the sparse language in the Constitution which, Justice Thomas has asserted consistently throughout his career (whatever you think of him), truly matters?  Justice Thomas has pointed out that the Court’s Indian Commerce Clause rulings are built on a fiction, that they stand without justification in the Constitution’s language.  Perhaps, rather than placing that power in the hands of state governments, as Justice Thomas seems to suggest, it more accurately could be asserted that the Constitution recognized native nations as separate polities, over which it exercised no control and no authority, save for an authority superior to the states to regulate interactions between these native nations and the American people.  Congress, rather than the states, could regulate commerce and intercourse by regulating the activities of American citizens, but it could claim no power to do anything within and over native nations themselves, because no such power is stated in the Constitution.  If the Doctrine of Discovery is a racist sham, as its critics assert, then perhaps the Congressional plenary power doctrine is a falsehood, too, a misinterpretation of framers’ intent and a complete fiction that the United States ought to address if it wants honor its endorsement several years ago of the UNDRIP.  And if it is a fiction, we are left with one conclusion about the federal government’s claim to exercise absolute authority in the realm of Indian affairs:  that its claim to plenary power rests on nothing more, at the end of the day, than brute force.  Colonialism is alive and well.

One thought on “Clarence Thomas is Right. And Wrong. Mostly Wrong. But, Still…..”