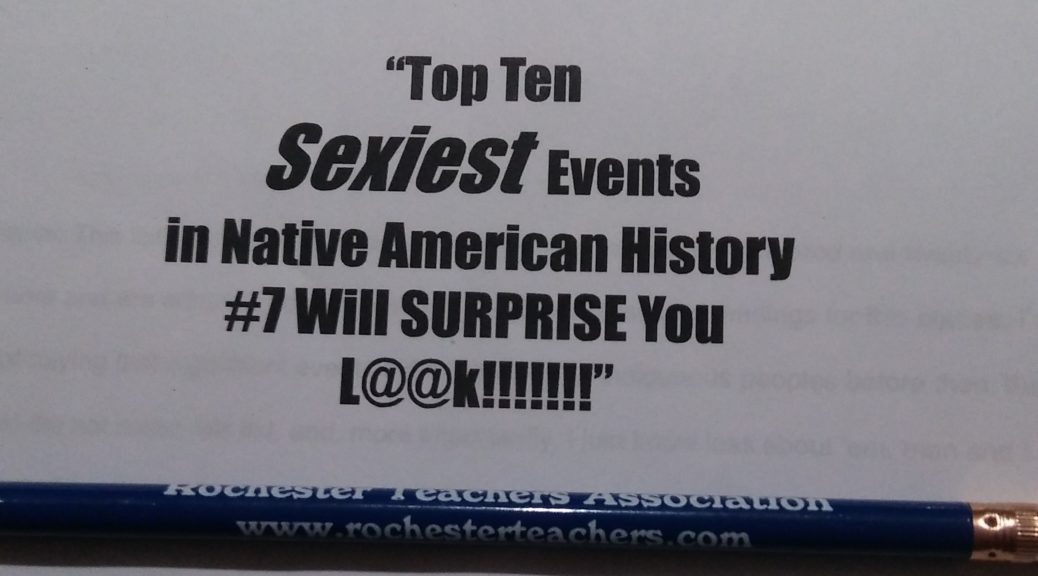 It is finals week at Geneseo.  The students in my Native American history course have worked hard all semester.  They have read a lot: Native America, of course, but also the Bedford readers by Frederick Hoxie and Colin Calloway, Prucha’s Documents of US Indian Policy, David Silverman’s Red Brethren, and David Treuer’s Rez Life.

I wanted to give them a project that would provide them with an occasion to show me what they knew, rather than what they did not know, and that required them to think about all of the reading they had done over the course of the semester.  So I asked them quite simply to identify what they believed were the ten most important events in Native American history, and to justify their choices.

Forty students enrolled in the course.  Two withdrew from the course, and a third disappeared.  So 37 students completed the final assignment. I tallied their answers, for the fun of it to be sure, but also to provide me with a sense of my own teaching effectiveness: if students see, for instance, an event as being important that I seldom discussed, or missed entirely something that I thought was exceptionally relevant, perhaps I did not communicate the material to them well enough or perhaps I am not emphasizing adequately something my students find fascinating.  Here are the results (apologies for not figuring out how to place these in neat columns):

The Pequot War, the Battle of Little Bighorn, Bacon’s Rebellion, and warfare in general received four votes each.  The American Civil War, the Sand Creek Massacre, the founding of the Society of American Indians, the Meriam Report, Guns,  the Indian Claims Commission, and the formation of the Iroquois League each received three votes.  Another handful of topics received a small handful of votes.

What to make of this? Clearly, many students chose to discuss things that were not, strictly speaking, “events.”  They chose rather to discuss topics or subjects, and I have no problem with that.  There is no doubting the importance of, say, disease, or guns, in Native American history.  The quality of the work was high, and though many picked items that I thought were not as important as they did, and some picked events that were so closely connected that it was difficult to separate them (Indian removal, for instance, and the “Trail of Tears”), I was quite pleased and impressed.

In the second half of the course, from the Revolution to the present, I divide Native American history into several periods: the Trade and Intercourse Acts, Removal, Concentration, Allotment, the Indian New Deal, Termination, and Self-Determination. I realize that there are limitations to this approach, but because I cover so much ground, I find it is the best way I know for students to understand developments occurring differently in different places.   The students’ answers reflect this emphasis.  I do try to point out, in Native America and in the powerpoints I show in class and in the readings I assign, that Native American history flowed through its own channels.  I tell the students that those things we consider events in the history of the United States may not be events in Native American history, at least not in the same way. The students’ answers indicate to me that I can do much better in the future.

To the students who are reading this, I thank you for a great semester. I enjoyed being able to speak with you twice a week over the course of the past four months, and I learned a lot from our discussions–about Native American history, about how best to teach it, and about you.  Good luck with the rest of your finals, and have a restful winter break.  I am looking forward to seeing you again when classes resume, for me, on January 24th.  And do not worry, your grades will be posted soon.