Halloween is right around the corner. I have written about why you should not dress up in a Native American costume before on this blog, and there is no shortage of commentary out there on the Internet Machine about why doing so can be destructive, hurtful, stupid, and in bad taste. Dressing like indigenous peoples, and the appropriation of the outward manifestations of Native American culture by non-Indians: they are common complaints. You do not have to work hard to hear it or read about it.

The Pendleton Company, for instance, manufacturer of clothing for your grandparents, 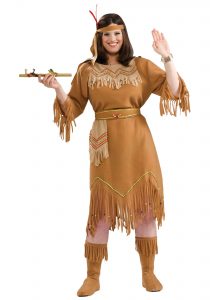 has recently come out with a 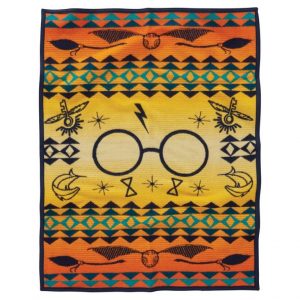 line of Harry Potter-inspired blankets.  That they are ugly we will set aside for the moment. The blankets clearly appropriate Native American motifs and images. Pendleton, indeed, has long stood accused of appropriating Native American imagery in its designs, and despite my feelings about these particular blankets, I imagine they will sell lots of them to people who want to make their homes “feel like Hogwarts.”

We could come up, if we wanted to, with hundreds of pictures of tasteless Native American costumes, hundreds of instances where non-Indian corporations profit or attempt to profit by appropriating Native American culture. (Though dated, Michael Brown’s Who Owns Native Culture is still a useful introduction to the issues).

Cultural appropriation is in bad taste. It is hurtful to some and angers many others. I do not doubt the sincerity of those sentiments for a second.  But these instances of cultural appropriation are relatively easy to point out, criticize, and in some instances, to remedy through education . And, let’s be honest: there are more intractable problems out there and some of them result in more than hurt feelings and pedestrian American Studies papers.  People are losing their lives and peoples are losing their lands.  Some perspective might be in order.

Here is my point. Sometimes I wonder if cultural appropriation is so big a problem that it justifies the amount of time devoted to it. For some people, yes, it is a big issue.  It is an important cause.  But I feel like there are bigger fish to fry.

Is it a bigger problem than the growing number of missing and murdered indigenous women and children in North America, which has become a major public issue in Canada but has only recently begun to attract attention in the United States?

Does it pose a greater challenge than the disparities that have endured for far too long in nearly every measure of social well-being between native peoples and other Americans?  The gaps in many of these areas have closed gradually over the past few decades, but progress has been painfully slow.

Or the readiness with which militarized police forces deploy violence that has, at it has done among African Americans, given rise to expressions that “Native Lives Matter“?  I do not mean to refer solely to the grotesque violence meted out on the peaceful #NODAPL protesters at Standing Rock.  This problem is significant, and it leaves behind it broken lives and grieving people.

Or the avarice and determination with which state governments and the Interior Department under Secretary Ryan Zinke view Indian Country as a resource to be exploited, and which leads them to attempt to skim the cream off of whatever prosperity comes to Native America?

And the continuing assaults on Native American nationhood, the empty pledges made by the United States to honor the commitments that came with its belated acceptance of the United Nations Declaration of the Rights of Indigenous Peoples?

I could keep going.

I spend time in my classes talking about cultural appropriation. I want students to think about its consequences for native peoples, but also to engage with why non-native peoples have for so long felt the need to engage in this behavior, and how their justifications for it have changed over time.  I spend time on the mascot issue, too.

But, for me, there are some things I cannot change, and I have reluctantly come to accept over the years that no matter what I do, there are only twenty-four hours in a day, and seven days in a week. I teach my three courses every week, hold office hours, prepare for my classes

, and try to do a bit of my own research in addition to keeping up with the massive scholarship in my field. I meet with my advisees, attend the meetings I am required to attend where the many decisions that need to be made on a college campus are sometimes made.  On busy weeks, I spend my time wading through the take-home essays I assign in lieu of in-class exams.  With family obligations to boot, my time is pretty tight.

In other words, I have to choose my battles. The Washington Redskins and Cleveland’s Chief Wahoo? Yes, they are racist, and so are you, maybe just a little bit, if these images do not bother you. And the many instances of cultural appropriation brought to my attention on the Internet Machine? I can laugh them off, ignore them, work myself up and take offense, bitch and whine, or view them as an opportunity to set the record straight, a teachable moment as they say in the education industry.

I have made a similar point before about the “Mascot Issue.” Even if the NFL has been particularly unwilling to budge on this issue, mascots are relatively easy to do away with if you complain loudly enough, 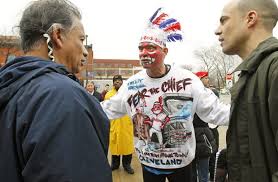 and in company with enough of your allies, to a school board, or a college, or a university.  Other issues–lack of protection for native peoples’ lives, liberties, and property in Indian Country; economic injustice and pervasive poverty; resource exploitation and environmental despoliation; attacks on sovereignty, and nationhood, and continuing injustice– these present much more difficult challenges, with progress slow and seldom guaranteed.  Historians will tell you that there are more dangerous racists than this dude to the left here, dressed up for a baseball game. Yeah, he’s an asshole, but there are far nastier people out there.

We who teach have limited resources at our disposal. Our time is limited. For the amount of education we have received, we earn relatively low salaries. If we are active researchers, as we should be, the hours we work are even longer. So we need to choose our battles.  You want to fight over mascots? Go ahead. Thanks to your efforts, and the efforts of your predecessors, these mascots have fallen out of favor nearly everywhere but in Washington, D. C. You want to get angry about Pendleton’s tacky blankets, or at Kylie Jenner for the name she gave to one of her new old lipstick colors, or other appropriations of native culture, go ahead. You have raised awareness, and thanks to your efforts, more people than ever understand that certain types of costume, display, representation, and marketing are hardly innocent.

But let’s not lose sight of the real enemies: racist police forces and law enforcement; the ineffectiveness and inefficiency of the Bureau of Indian Affairs; poor history and civics education that leaves most Americans entirely ignorant of their country’s Native American past and present; and the enduring colonialism of the American empire.  Do away with the mascots, reduce the amount of cultural appropriation, but let’s not exaggerate its effectiveness. Fewer Native American mascots, fewer Indian Halloween costumes, and less cultural appropriation will not increase life expectancy or  reduce the economic privation experienced by those living in Native American communities. Nor will quality of life improve in First Nations and Native American communities.  The number of young people, in the throes of desperation or enduring a legacy of intergenerational trauma, or the numbers of missing and murdered indigenous women and children, will not be reduced one bit. Violence and suffering in Native American communities would not cease, police would not become more tolerant, and state and corporate interests no less avaricious in their desire to exploit Native American lands. And unpacking stereotypical representations of indigenous peoples will not help secure the lives, liberties, and properties of Native American and First Nations people.

So what do you want to fight about? Be honest. Some causes are easier than others, and some will require of you a greater investment, and involvement in them will carry heavier consequences.  Some of these issues are quite literally matters of life and death.  And some of these problems might hurt your feelings.  Others, and you know this if you have read Native America, can break your heart.  It is up to you to decide.