At long last, Native America has hit the shelves.  I received my authors’ copies the other day, and there are several dozen copies on my campus bookstore’s 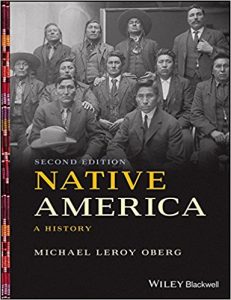 shelves awaiting the students who will arrive in two weeks or so.  The first edition appeared in 2010, so it this version has been a long time coming. I hope that it will not be another seven years before the next edition appears.

And that is because so much wonderful scholarship is being produced in this vibrant field. Writing a textbook can be difficult, but there is no better way in my view to keep learning.  I am amazed by the breadth and depth of this work, and the frequency with which it forces me to return to my notes, revise my discussion questions, rethink how I organize my class time, and how I present this material to students.

So to my friends in history and anthropology and archaeology and political science and geography and law who write in this field, thank you.

To my colleagues in Early American history, who were just awakening to the potential of integrating native peoples into the broader history of the Atlantic World when I began graduate school in 1990, and who are now placing the history of native peoples at the center of their histories of #VastEarlyAmerica, Thank you.  Juliana Barr, Michael Witgen, Colin Calloway, Robbie Etheridge, Elizabeth Fenn, Lin Fisher, Richard and Shirley Flint, James Brooks, Matthew Babcock, Heidi Bohaker, Kathleen DuVal, David Silverman, Steven Hackel, Jeffrey Ostler, Jon Parmenter, Timothy K. Perttula, Josh Piker, Jim Rice, Dan Mandell, David Preston, Andres Resendez, Brett Rushforth, Natale Zappia, and Ned Blackhawk–I have not met all of you, but thank you for your wonderful scholarship, and for those of you I do know, thanks for your friendship, kind words, and support.  I read on Twitter about the amount of competition there is in academia, and the amount of stress.  I totally understand that.  But, for myself, I have been very, very, grateful for the many kind and generous and interested (and interesting) people I have met who have given me so much.   There are so many names here I have not mentioned.  So many people producing such fantastic work.

In the time that passed between the first and second edition, some wonderful and important work appeared on nineteenth century native communities. Pekka Hamalainen’s The Comanche Empire received a massive amount of attention, but there were other works as well that shed light on individual communities.  To Laurence Hauptman, Rose Stremlau, Andrew Denson, Matthew Dennis, C. Joseph Genitin-Pilawa, Alexandra Harmon, Colette Hyman, Gary Clayton Anderson, Karl Jacoby, Brendan Lindsay, Benjamin Madley, Devon Mihesuah, G. Bruce Miller, Greg Smithers, Coll Thrush, Lissa Wadewitz, Stephen Warren–thanks to you as well.  Those of you I have not met, I look forward to getting to know some day.

A number of works struck me as particularly significant in the 2oth century history of native peoples in the United States.  To Daniel M. Cobb, Frederick Hoxie, Margaret Jacobs, Paul R. Mackenzie-Jones, Nicolas Rosenthal, Paul Rosier, Frank Rzeczkowski, Audra Simpson, Sherry Smith–thanks for your work as well. You have taught me much.

And to all the friends with whom I have discussed this work over the years, thanks to you, too.  Writing is a solitary task, but it need not be a lonely one. Peter Olsen-Harbich, a Geneseo alum now at the College of William and Mary, and Tom Callahan, a former student now out in the American West, thanks to you both. Tom and I spent days driving around upstate New York, visiting the sites of significance in the history of the Haudenosaunee, talking about past and present as we went.  Two former students from whom I have learned a lot.

To my colleagues at Geneseo, who offer such a wonderful and supportive atmosphere for doing good work, I offer my thanks, too.   I have taught at two other colleges–none of them can compare to what I have at Geneseo.

And my family, and especially Leticia Ontiveros, who has heard more about this book than she ever wanted to hear, but who has taught me so much about life and how to live it, even if the lessons do not always stick–thanks for everything.

I hope those of you who stumble across this book find the second edition of Native America of value.  If you have suggestions or criticisms, comments or questions, please send me your thoughts.  It has been a long journey indeed, but I am excited about the possibility of moving forward with others, and I look forward to hearing from you all.