As Lawler correctly points out,

The 1998 discovery electrified archaeologists and historians. The artifact seemed a rare remnant of the first English attempt to settle the New World that might also shed light on what happened to 115 men, women, and children who settled the coast, only to vanish in what became known as the Lost Colony of Roanoke.

Now it turns out that researchers had it wrong from the start.

That’s for sure, and we have known that for a while. Phelps was convinced that the ring was gold, but recent research at ECU indicates that it was made from brass.  Not a bit of gold in it at all.  And that is disappointing news, for many people.  Why?  After Phelps’ original discovery of the ring, Lawler notes,

A senior member of London’s College of Arms subsequently noted that the seal on the signet ring was of a lion passant, and suggested that it might relate to the Kendall family of Devon and Cornwall. A Master Kendall was part of the first colonization attempt in 1585, while another Kendall visited Croatoan when a fleet led by Sir Francis Drake stopped by in 1586. Though this link was never confirmed, the object was nicknamed the Kendall ring.

Since Phelps thought the ring was made of a precious material and likely belonged to the Elizabethan era, he argued it was an important clue. “That doesn’t mean the Lost Colony was here,” he told a reporter at the dig site after the ring’s discovery. “But this begins to authenticate that.”

When the artist and governor John White returned to Roanoke in 1590 after three years away, he found no colonists but he did find the word “Croatoan” etched into a post set by the English.  Historians have long thought that for a variety of reasons, some of the colonists may have relocated to Croatoan, today’s Hatteras, even though the evidence in White’s account shows that he thought the colonists had moved up the Albemarle Sound.  The only native peoples willing to talk to the English lived there–Manteo, baptized and named “Lord of Roanoke” by Ralegh, was from Croatoan, even though his people begged the English colonists not to hurt them and steal their food. Croatoan, morever, might have served as a workable lookout for English ships arriving through the southern route.  Phelps, as a result, felt that he had found something of significance, proof that the colonists had gone to Croatoan.

Still, archaeologists were skeptical from the beginning.  Phelps was slow in letting investigators see the ring, or his field notes.  When those were made available to researchers, the problems with linking it to the Roanoke colonists were obvious.  The ring, for instance, was found in the wrong archaeological context, deposited with items from a century after the Roanoke colonies.  The ring may h 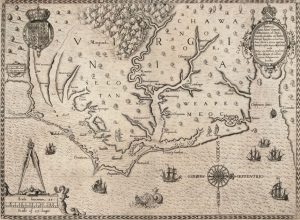 ave been traded from native person to native person.  There need not have been any English outpost for the ring to arrive at Hatteras.  As Charles Heath, an archaeologist who was present when Phelps discovered the ring and who Lawler interviewed pointed out, “a stray 16th-century artifact found here and there on the Outer Banks will not make for a Lost Colony found.”

This has been a tough truth for many of those who are determined to find the men, women, and children who settled on Roanoke in 1587. The fate of the Lost Colonists is one of those great American historical mysteries, even though the sands and shores of the “New World,” according to surviving European accounts, were littered with the remains of many, many Lost Colonists.  This fascination, which continues, is thus an example of American Exceptionalism, and it is one that students of Native American history ought to try to counter.  My book on Roanoke, published a decade ago, was one effort, but there is still much work to do.

A hundred or so colonists, who left Roanoke Island sometime between late 1587 and the summer of 1590, never to be seen again.  That is the story.  You can see it acted out in the “Lost Colony” drama, staged every year at the Fort Raleigh Historic Site. You can read about it in book after book.  And here is my problem with all that.  Rather than casting Roanoke and the fate of the colonists as an English story, it is more fruitful, I would argue, to recognize that the men and women sent by Sir Walter Ralegh to America intruded into a world dominated by Algonquian peoples.  The English planted their first outpost on Roanoke Island in 1585, after all, only because native peoples allowed them to.  When they returned in 1587, we know that they found themselves under attack, and that many of those same native peoples had little interest 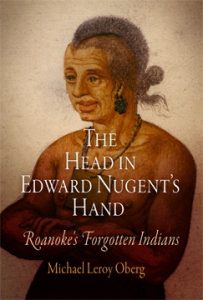 in assisting the newcomers.  Whatever happened to the colonists, in other words, was determined by native peoples. Whether they blended in with Indians on Croatoan, or in the interior, or were wiped out by Wahunsonacock and his warriors from the Powhatan Paramount Chiefdom, native peoples determined the fate of the Lost Colonists.  Yet native peoples in these stories are largely invisible, their motives and their perceptions of the English (and, yes, these perceptions can be unearthed through a careful reading of the surviving documents) not a factor.  Roanoke is an English story, when all the evidence suggests that this is a story of indigenous peoples dealing with a small group of outsiders who likely never learned how to play by Algonquian rules.

We historians who study the Native American past need to counter American Exceptionalism wherever it presents itself. We need to move native peoples into the heart of our national story: American history cannot be told accurately without Indians, and in the era before the Civil War especially, native peoples were far more dominant and powerful and sovereign than white American narratives allow.  These exceptionalist, settler-state narratives, then, are not only historically incorrect, but dishonest at a fundamental level, in that they erase native peoples from an American story that they helped to create and shape and make their defeat and marginalization and dispossession of these communities seem inevitable, foreordained and thus forgiveable.

Though Smithsonian is increasingly looking like a travel magazine for old people, like Modern Maturity with less stuff about heart health and diet, it has the resources to do a better job on these issues.  David Sutton Phelps thought the ring he found could prove the location and fate of the Lost Colonists.  He thought it was made from gold.  It wasn’t. The ring was, like his interpretation, brass, something much less than he thought.  The story of the Lost Colonists will not be complete until the native peoples with whom they interacted are placed at the center of the story.