“Human trafficking, the exploitation of a person typically through force, fraud, or coercion for such purposes as forced labor, involuntary servitude, or commercial sex,” Gretta L. Goodwin of the Government Accountability Office told the Senate Committee on Indian Affairs yesterday, is “occurring in the United States.”  Drawing upon evidence from the Office of the Attorney General,  traffickers seek out vulnerable individuals.  This vulnerability, Goodwin said, “comes in many forms, including age (minors), poverty, homelessness, chemical dependency, prior experiences of abuse, involvement in foster care programs, and lack of resources or support systems.” 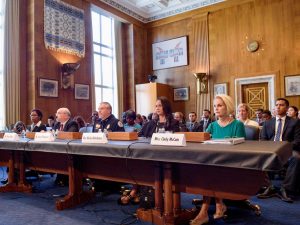 Native Americans, she argued, are indeed such a vulnerable population.  Goodwin cited statistics familiar to those of us who study Indian Country.  28 percent of native peoples live in poverty nationwide, compared to 15% of the general population.  According to “the 2010 National Intimate Partner and Sexual Violence Survey, conducted by the Centers for Disease Control and Prevention, an estimated 27 percent of Native American women have been raped in their lifetime compared to 18 percent of American women overall.”  Native American children are twice as likely as other children to enter the foster care system.

These figures, and their significance, were underscored by Nicole Matthews, the executive director of the Minnesota Indian Woman’s Sexual Assault Coalition.  The Native American women she and her associates interviewed demonstrated that historical trauma and childhood sexual abuse “were a precursor or antecedent for the women who were used in trafficking.” Indeed, Matthews testified, “79% of the women we interviewed were sexually abused as children, by an average of four perpetrators; and 67% of victims reported that they had family members who were sent to boarding schools, and most were abused in those boarding schools.”  Matthews’ research is available here.  It is a stunning document.

Cindy McCain, who participates on the Arizona Governor’s Council on Human Trafficking, spoke last at the Committee hearing. She told the senators that she would soon participate in an anti-trafficking roundtable in North Dakota. She wanted the senators to know that the remoteness of the Bakken area in that state, and

“the high unemployment rate of nearby Indian reservations, combined with the oil and gas boom, have created a hotbed for trafficking.  Victims are mostly Native American women and girls transported to the region specifically for sex trafficking. Many of these victims are under the age of 18. Children being sold for sex. Outward and organized child abuse and rape.”

McCain pointed out that human trafficking had enslaved more than 41 million people worldwide.  It is, she said, an organized crime.  But it is also a crime of opportunity for, she argued, “Native American girls and women are all too often trafficked by their own relatives.” McCain had seen herself six small girls “lined up against a wall in an Indian casino outside of Phoenix on display for customers.”

McCain did not provide evidence for the involvement of Native American families in the trafficking of their young relatives, and her claim that Native American girls fetched a high price because of their “exotic beauty” is painful to read.  Still, she and the other witnesses raised some important issues.

There is a dearth of evidence.  Of the 132 tribal law enforcement agencies (LEA) that responded to the GAO’s request for information, 27 reported that they had conducted investigations between 2014 and 2016 that involved human trafficking.  And, according to Goodwin,

“Nearly half of tribal LEA respondents (60 of 132) reported that they believe human trafficking is occurring on tribal land in their jurisdictions beyond what had been brought to their attention. Officials from two tribal LEAs told us during in-person meetings that in their experience some victims do not come forward to report their victimization because they are embarrassed or feel ashamed. Several survey respondents also indicated that they suspect there is more human trafficking than what has been reported to them because of the presence of casinos on their land (14 of 60). For example, officials from one LEA explained that the tribal casino hotel may be used as a venue for sex trafficking. Some respondents (13 of 60) suspect that sex trafficking may be occurring as part of some of the drug crimes that they investigate. Officials from one county LEA we visited near a tribal community told us that officers may not recognize that human trafficking is taking place, particularly when it occurs alongside another crime like drug trafficking.”

The Justice Department, the Bureau of Indian Affairs, Homeland Security–all of them provide grants to help combat human trafficking, but the problem remains ill-defined, one of great magnitude but hazy borders.  More resources are needed still.  Jurisdiction is a critical issue, as well. Much of the trafficking is supported by non-Indians who are in all but a few instances beyond prosecution by tribal authorities.  More information is needed. Tracy Tolou, the director of the Office of Tribal Justice in DOJ said that data limitations are significant.  It is hard to know the scope of the problem when it remains so difficult to investigate and prosecute.  According to Jason Thompson, the acting director of the Office of Justice Services in the BIA, only twelve investigations by his office have been conducted over the past four years, with only 23 defendants prosecuted.

This is crime on the margins. When I discuss problems related to the issues the Senate Committee confronted in my Indian law class, there is a sense among some of my students that this sort of exploitation and violence is inevitable.  Native communities are poor.  They are isolated.  The Supreme Court has made the prosecution of non-Indians by tribal law enforcement officers difficult where it is not impossible. I ask the students what might be done.  They struggle to think of answers.  I understand the difficulties.  I appreciate their efforts to think of solutions.

Native American history is a story of tragedy, of violence, of crime, of theft and plunder. It is, at other times, a story of blundering goodwill.  Even those who want to do right often do damage.  I have made my career teaching students this history and writing about it.  I once got involved in an argument with a conservative friend who said that if these problems went away, I would be out of a job. That I want to find things to bitch about.  It is a stupid argument, and I told my friend this.  I am a historian. I would love for these problems to be part of the past.  And that might be my insight on this story, as a historian.  We, as a nation and as individuals, have choices.  We are not doomed to repeat the past, and we do not have to continue walking that ragged path that we have walked for so long. There are choices here. Write your representatives and senators.  Write the Attorney General and the President. Given the people currently occupying many of those offices, it is difficult to be optimistic, but these are problems that can be ameliorated.  It is a choice.  We can do more.