The recent story that appeared in The Intercept about the private security firm Tiger Swan, its cooperative intelligence-gathering with local, state, and federal law enforcement authorities, its propaganda work in behalf of the Dakota Access Pipeline, and the sometimes-brutal tactics it used to protect the corporate “assets” of Energy Transfer Partners, the Fortune 500 company behind the construction of the DAPL, should be a much larger story than it is.  The Tiger Swan story reveals the rottenness that lies at the core of America’s continuing treatment of native peoples and their allies.

Tiger Swan, as revealed in the documents obtained and published by The Intercept,  produced intelligence briefings for law enforcement agencies, kept close tabs on the Water Protectors at Standing Rock, and may have infiltrated the protesters’ camp.  They spread disinformation on social media,

measuring the influence of their posts and stories, and may have kept something like an “Enemies List” to trace leaders of the protest movement.  All of this in the name of a corporation, the business interests of which they protected against an overwhelmingly peaceful protest movement run by people worried that the DAPL could jeopardize waters flowing through the Standing Rock Reservation.  To the mercenaries at Tiger Swan, the protesters were “jihadists” and they should be countered using similar tactics.

Fort Apache, the Bronx.  You remember that.  Or American soldiers in Vietnam marching out on patrol into “Indian Country.”  The supposedly warlike qualities of native peoples and the supposedly violent lands on which they lived have been transposed time and again as a way for American soldiers and officers to comprehend whatever conflict they engaged in.  These soldiers enter the theater in Apache helicopters, following the Tomahawk cruise missiles that preceded them.

Here, the scenario is flipped. The Jihadists that American forces fight in other parts of the world provide the language for Tiger Swan’s understanding of the #NoDAPL movement and, in effect, their lens for understanding native peoples at home attempting to protect their quality of life.  The language of war, of insurgency, has returned to Native America.

I have written about Standing Rock and the #NoDAPL movement before, so you know how I feel about it. If you are reading this blog, chances are you read about the protests, watched the DIY reporting from the protestors themselves, or saw the courageous on-the-ground journalism by Amy Goodman, her colleagues at “Democracy Now!” and other media sources.  Some of those reporters put their bodies on the line to bring this story to you and me.

IF YOU WATCH or listen to right-wing media, you will learn that left-leaning college students, protesting on their campuses, are the major threat to freedom of thought, speech, and expression. Coddled and intolerant, the story goes, these fragile snowflakes will not expose themselves or allow others to be exposed to ideas with which they disagree. They will drown out the voices of those whose ideas they oppose.  You read about the protests at Middlebury.  And maybe you saw the recent news coming out of Evergreen State College in Washington. Be afraid of the students, we are told, and too many people seem willing to comply.

I am going to use this Intercept piece in my Native American history class in the fall. I may use it the first day, or I might assign it at the end. Whichever, I feel my students need to see this stuff, think about it, and remember that the power of history can hang heavy on the backs of too many Americans. It might rile the students up.  Maybe they will protest.  Maybe they will get pissed and start breaking shit.  More likely, if they are good history students—and most of them are—they will see this story for what it is.

In recent weeks, David Grann’s Killers of the Flower Moon has gained a lot of attention.  He tells the story of the murder of oil-rich Osages 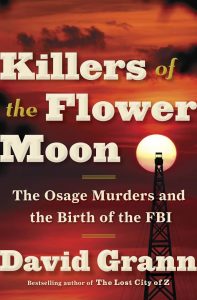 in the early twentieth century. It is a riveting story.  Historians have known about the Osage murders for a long time, but it is good that Grann brought it to the attention of a broader public.  Its significance should be clear.

From Jamestown to Standing Rock, from the Virginia Company of London to Energy Transfer Partners, the partnership of corporate and business interests with the forces of the centralized state has been a constant in American history.  This is not partisan.  Tiger Swan was doing business during the Obama presidency.  It continued its work under Creon Trump.

I reason here from the premise that no corporate asset is more valuable than a single human life.  Yet, as I write, I read about how state after state is trying to enact measures to criminalize protest.  I listen to the recording of Montana’s new congressman pummeling one reporter (who cannot fight back) and read how the tough-guy governor of Texas took a break from tormenting LGBTQ kids to joke about shooting others.

It is abundantly clear that the forces of suppression and violence that have been part of the lived experience of peoples of color on this continent for centuries are now threatening to affect non-native peoples in unprecedented and alarming ways.

There is a wonderfully revealing passage in Vine Deloria’s famous book Custer Died for Your Sins: An Indian Manifesto. “When the Kennedys and King were assassinated,” Deloria wrote, “people wailed and moaned over the ‘sick’ society.  Most people took the assassinations as a symptom of a deep inner rot that 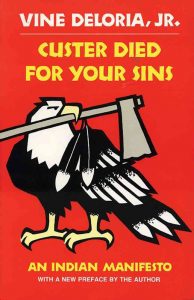 had suddenly set in.  They needn’t have been shocked. America has been sick for some time. It got sick when the first Indian treaty was broken. It has never recovered.”

Dakota Access, and the sorts of collusion between law enforcement, corporate interests, and for-profit armies like Tiger Swan, show that the sickness Deloria described is still here. Indeed, it has festered, become malignant, and done its damage in new ways in this new world order. Tiger Swan did its work during the Obama years.  It continues its work now.  It continues to protect ETP’s corporate assets.  The sickness runs deep. The rottenness is profound. If, as Felix Cohen once wrote, native peoples, “like the miner’s canary,” mark “the shifts from fresh air to poison gas in our political atmosphere,” then “our treatment of Indians…reflect[s] the rise and fall in our democratic faith.”

Let’s not forget Tiger Swan.  Let’s remember that history is not only part of the past.