I published an opinion piece in the Rochester Democrat and Chronicle today, “The Case for Civic Education.”  I argued that one possible explanation as to why so many of Donald Trump’s supporters have accepted his trampling upon the Constitution is because too many Americans are unfamiliar with the country’s basic institutions, its history, and what the Constitution says.

The essay has drawn a bit of fire, but not nearly as much as I would have liked. I want to argue about these issues, and I want to have a debate.  So I will write.  It is the best way I know to engage with a broader public, to at least provoke some thought. 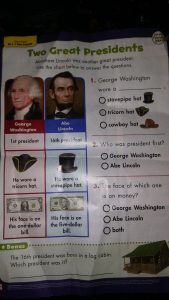 Alas, the D&C wants its opinion pieces short, 450 words, so there is not a lot of room to elaborate.  And for inexplicable reasons, the editorial staff decided to cut out the opening paragraph to the essay, despite the fact that I submitted a piece that came in below their word limit.  Maybe that opening was a bit inflammatory, but I do not think so.  The actual essay reads as follows:

A large minority of the voters who cast ballots last November chose Donald Trump to be their president, a choice endorsed and approved by the Electoral College, that antidemocratic anachronism designed to ensure that slaveholders controlled the national government.

You have read in these pages many explanations for Trump’s unexpected victory. I would like to add another.  A significant number of voters cast their ballots for a bullying narcissist with little knowledge and less respect for American constitutionalism because they simply do not know enough about the Constitution, America’s political institutions, and the nation’s long struggle, in the Founders’ words, to “form a more perfect union.”  They can excuse Trump trampling over the Constitution because they do not know what the Constitution says.

Let’s face it: despite a nationwide commitment to standardized testing, the social sciences, humanities, and liberal arts have been under attack.  We need “more plumbers and less philosophers,” said Marco Rubio during his brief quixotic run for the presidency.  The Lieutenant-Governor of Kentucky urged students not to study history but, instead, to focus upon something useful. Even Governor Cuomo, in his otherwise laudable proposal to provide tuition-free access to SUNY schools, promoted the program as a way for the state to produce more skilled workers, not informed citizens equipped to participate in American democracy in a meaningful and constructive manner.

Education in history and the liberal arts, however, produces citizens capable of asking the tough questions and looking for answers in all their complexity.  They do not settle for simple solutions and pat answers. They know how to question assumptions, and demand evidence.  Civic education leads to responsible and mature civic engagement. Little wonder, then, that these fields of study are devalued and dismissed.

Less than a third of Americans last year could identify all three branches of the federal government.  Another third could not name a single branch.  Many times more Americans can identify all five members of the Simpsons family than the five freedoms protected by the First Amendment.

The Founding Fathers argued that a flourishing republic needs citizens capable of displaying the virtue to set aside their narrow self-interest and petty fears and jealousies in order to pursue the common good.  They argued that citizens must be independent, informed, and active. An ignorant and quiescent populace, they feared, made fit tools for a tyrant.

I cannot predict what will happen over the next several months and years. But I have watched the protests. We must do more, I believe, to engage the public, explain how our institutions are supposed to work, and protect them from a presidential administration that threatens the country’s fundamental aspiration of liberty and justice for all.

The evidence to support my assertions is not hard to find, and we should consider this evidence closely.  We have our work cut out for us.  Rick Shenkman, for one example, summarized some of the findings of his Just How Stupid Are We at Alternet.  The Annenberg Center for Public Policy in 2014 released a study in 2014 warning about Americans’ lack of basic civic knowledge.  Jason Brennan’s analysis from 2016 in Foreign Policy raises some points worth considering.  And the American Council of Trustees and Alumni found that American college graduates are “alarmingly ignorant of America’s history and heritage.”

This should disturb us all, regardless of the political party which claims our allegiance, regardless of who we voted for in the primaries or the general elections.  These results are a call to action. The challenge will be mustering the courage to answer that call.

I like to write opinion pieces. It is important for us all to bring our expertise to bear on public debates, and to make our voices heard.  Doing so requires a willingness to take some heat, some criticism that can be really, really vicious at times.  In my view, it comes with the territory. I could fume to my friends on Facebook.  I could bitch and whine or yell at the television set.  Better it seems to me is the effort to engage with as large a public as possible, to challenge assumptions, to offer explanations, and to provoke discussions.

6 thoughts on “The Case for Civic Engagement”