Richard Hakluyt the Younger compiled the sources that allow historians to understand the encounter in the sixteenth century between English explorers, mariners, and traders, and a host of native peoples across several continents. Oxford University will host a conference sponsored by the Hakluyt Society in November commemorating the 400th anniversary of Hakluyt’s death.  I will be presenting, as will Joyce 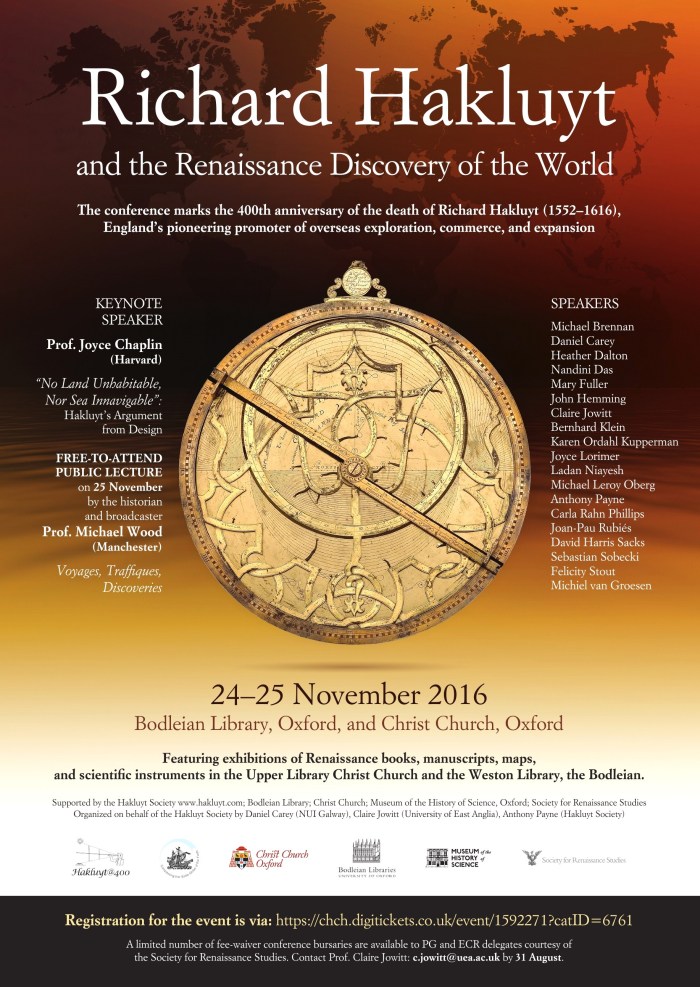 Lorimer, Carla Rahn Phillips, and many others.

The Treasury Department recently announced its decision to remove Andrew Jackson from the front of the twenty-dollar bill, a decision justified by Jackson’s slaveholding and the large role he played in the odious policy known as “Indian Removal.”

Jackson certainly bears responsibility for the removal of tens of thousands of Native American people from their homes in the eastern United States to new homes in the west.  He signed the Indian Removal Bill into law in 1830, presented Indians with the Hobson’s choice of either leaving or subjecting themselves to hostile state legal systems, and ignored an important Supreme Court decision that protected Indian rights against state aggression.  Men he appointed negotiated removal treaties with eastern Indians.  Thousands of Native American men and women died.

But Indian removal was popular in many parts of the union. Blaming Jackson for the policy might be emotionally satisfying, but it oversimplifies a complex past.  Millions of white Americans supported Indian removal and benefited economically from it. Many still do.  Indeed, New York became the “Empire State” on lands wrested from the state’s native population.  Millions were guilty, even if Jackson was guiltier than most.

Removals began during the colonial period, a product of disease, enslavement, warfare and dispossession.  It continued during the Revolution as the American patriots found it easier to burn Indian towns than to engage native forces in the field.  Thomas Jefferson in 1803 thought the possibility of removing the Indians a justification for acquiring Louisiana from the French.  Cherokees began moving to Arkansas in 1808; Oneidas from central New York left for Wisconsin in the early 1820s, hoping in part to avoid encroachments on their lands that state and federal authorities lacked the interest or the ability to stop.

Removals, then, began long before Andrew Jackson became President. They continued after he left office.  The Cherokee “Trail of Tears” took place in 1838 under Jackson’s successor Martin Van Buren. That same year, Iroquois in New York were coerced and defrauded into signing the most corrupt Indian treaty in all of American history at Buffalo Creek.

In a couple of years, Andrew Jackson will be gone, “removed” to the back of the twenty-dollar bill.  Good riddance.  He was a violent and angry man, whose harsh embrace of majority rule whatever the consequences ran roughshod over the rights of minorities and heightened sectional tensions.  Though his was a consequential and importance presidency, he was a man who thought dueling a reasonable way to resolve conflicts, and his economic policies provoked a significant financial crisis.   He attempted to silence the abolitionists, and he embraced and endorsed Indian Removal.  But that heinous policy was bigger than one man, and we should not think for a second that demoting him does much at all to expiate the sins of a very guilty nation.